My Kingdom for the Princess II 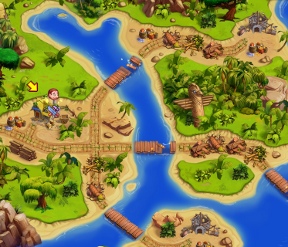 After their wedding at the end of the first game (oops, spoiler alert), Princess Helen and Sir Arthur decide to go on their honeymoon. After carefully selecting which hat to wear, the couple hops in a hot air balloon and heads to the Azure Archipeligo, a land rumored to be inhabited by a wizard who sleeps in the trees and eats nothing but coconuts. Sounds lovely! After their balloon crashes, the couple strikes a deal with the local tribe, receiving their last boat in exchange for fixing up their villages. It's off to do some repairs!

Just like the original My Kingdom for the Princess, the sequel brings back the very simple worker-resource relationship that's a snap to use. Each map is filled with branching pathways dotted with obstacles, resources, and maybe a building or two. In order to clear a path to the goal, you must send out workers to chop trees, repair the road, and so on. In order to do those things, they need food and wood. You obtain both by picking up resources at spawn locations as well as from buildings and by working in the field. The challenge comes from managing which paths to forge, which resources to hoard, and how to spend your precious earnings.

Each level can be completed by satisfying a short set of goals listed at the top of the screen. This always involves clearing a path to the exit, which is normally blocked by rocks, but sometimes you'll have other tasks to complete as well, such as gathering a few flowers or building a hunting lodge to take care of pesky enemies.

The bonus meter from the original game returns, filling up as time progresses and allowing you to unleash temporary boosts to worker speed, resource numbers, time, and so on. These end up being quite helpful as the work day wanes and night threatens to fall, sapping your time bonus and postponing the completion of your mega castle. 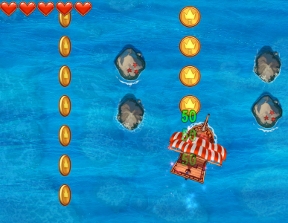 Analysis: My Kingdom for the Princess II has that same "just one more level pleeeeease!!!" kind of addictiveness that its predecessor had. Each stage packs in more branching paths, more obstacles, and more challenges than the last, encouraging you to press onward to see what waits for you in the next zone. The variety of locations is a nice bonus, as tropical island scenery gets old after a few levels.

Mini-games are an unusual sight in simulation games, but Nevosoft wasn't afraid to include a few simple diversions to break the focus on resources and workers. I do have two questions, though: why are there giant bats in the water, and how can they hurt my ship so?!

My Kingdom for the Princess II suffers in two areas: originality and pacing. The game isn't all that different from the first, which is both comforting and a bit unnerving, as the series could use a touch of innovation. Within each level, you'll experience hectic periods where there's too much to do followed by lulls in the action where all you can do is wait. This can be alleviated by managing your tasks well, but the down time is often unavoidable, leaving you twiddling your thumbs while your chances of a bonus slowly drips away. Watching workers trundle about the map is also a bit tedious, but this gets better later in the game when there's more to do and more people in which to do it.

A great casual building/resource management game that scores big points for simplicity, ease of use, and addictiveness. Play it once to see what it's like, then keep playing because it's so darn good.

Surely the minigames and cutscenes at the end of each section are the wrong way round? The intro to the minigame references something thats halfway through the little cutscene bit.

Unfortunately, the mini-games are arcade-style where you're either trying to steer something or shoot/zap something. And they aren't skip-able. So if you have a laptop with trackpad instead of a mouse you're really up a creek. Even if you do, they can be tiresome and take many tries if this isn't your style of game (hence why you might want a time management game which this is supposed to be). This is really a disappointment in this version of MKFTP, and defintely knocks off a star IMHO.

There are also multiple levels where you have to pick dozens of flowers (there were a few of these around in the the first version) rather than strategize a way along the road. It's not a couple that you figure out how to get to, but often many just sitting there by the main buildings, so no strategy, just using up resources...

In MKFTP 1 the storyline was silly, and made me laugh out loud with it's quirky style poking fun at overused "save the princess" story, but this one is just...weird. And, yeah, Fosjam, it does seem like the cut scenes should come before the coin collecting mini-games with the boats.

But all the fundamental gameplay from the first version is still there, and it remains great! There are a couple of new styles of buildings to keep things interesting, but all the basics are the same. Unlike the first one, you sometimes have to clear the map, rather than strategize what needs to be cleared to get to the exit -- and the exit might be right by you -- so you have to re-think your approach sometimes.

I love the game itself, but I really and truely HATE the little minigames and wish I could skip them. I wonder, too, if it damages my mouse (laptop w/touchpad) to keep hammering it like that.

I came here looking for a way to skip the irritating minigames, but looks like there is no way?

I am at level 4.7, and after whacking hornets, ghosts and snakes, I just can't stomach whacking the same old thing in the form of wolves. Not that these whacking minigames are difficult, cos all the wolves converge at a point, so I just have to keep clicking and clicking, but it is soooooooo boring.

I am giving up on this game.