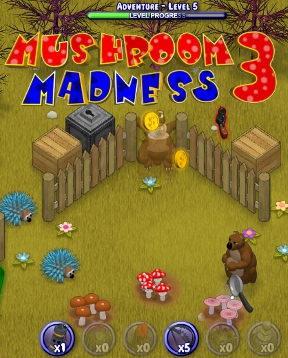 Ever since mankind first discovered agriculture, a war has raged. A silent, deadly war between man and... cute furry little creature for possession of that which mankind has worked and slaved over in the hot sun to bring home to his family. If only there was some way to keep those pesky pests away... The eternal battle between man and creature for mushrooms has just heated up with Mushroom Madness 3, an action defense charmer from Vitaly "Silen" Sidorov of Silen Games.

If you've played the original or the sequel you know the drill: you have a nice patch of mushrooms, just ready to be picked and sautéed in butter and added to a nice cream sauce or risotto. Unfortunately, every woodland creature in the tri-state area knows those tasty, tasty fungi are there and are intent on stealing them for themselves. The player must then...dispatch said creatures with whatever comes to hand, beginning with a bedroom slipper and moving up, eventually, to total nuclear Armageddon. Points are earned in each round for various things, from how many mushrooms are saved to how much widespread destruction has been caused. For each animal that has been sent to that great mushroom patch in the sky money is earned that can buy various upgrades that make it easier to rid the world of these venomous pests.

Mushroom Madness 3 has added new levels, new scenarios, and best of all many new weapons and upgrades to the mix, including a fantastic "auto-click" feature that saves the gamers' mouse finger from the muscle cramps that ensue when rapidly clicking to annihilate all of the cute and cuddly yet annoying fauna of the forest. Fun, frantic, and addictive, Mushroom Madness 3 is a great way to vent all of your inner pent up rage and frustration on a wide variety of animals, insects, and birds. Just try to take a break once in a while and don't try any of it in real life, especially the nukes.

The mind is boggled.

For the sake of not wasting this comment space, I felt the upgrades were well-paced which made the rest of the game engaging. Much of the challenge was removed once fully upgraded, of course, but a lapse in concentration did make me lose a couple of the later stages.

Perhaps everything to be said about this game was said on the comment pages for the first two?

I liked this game, as it was a good step up from Mushroom Madness 2.
I found that some things that helped (as I'm not a great gamer) were:
Saving up for unlimited ammo
Having an automagnet
Aiming for the achievements as they brought extra cash.

3,587 Views
1 Comment
jayisgames.com— Age of Origins is a massive, super engaging mixture of strategy, tower defense and the drooling undead. It's creating massive buzz around the mobile gaming world, and with good reason. With more than 40 million downloads worldwide, the game...  ...

3,870 Views
3 Comments
chrpa— Jayisgames needs your help to continue providing quality content. Click for details After more than a year we've got a new game by Yonashi and it's a good one! You stand in front of a wall with eight lockers...  ...

2,390 Views
2 Comments
chrpa— Jayisgames needs your help to continue providing quality content. Click for details Welcome to Weekday Puzzle! In unique platformer by mmatt_ugh is only one key needed and you can still jump a lot. Then comes an interactive fiction by...  ...