Has everyone pretty much had enough of physics puzzle games by now? Click to remove the geometric shapes, launch balls in the right trajectory to bash a structure, stack geometric shapes according to spec. It's all a bit... samey, right? Yeah, let's just put all these derivative games awaaaaitaminute waitaminute, what's this? untame brings us the weirdest gameplay formula we've encountered in a while. In Mushroom 11 you play an amorphous colony of intelligent regenerating fungus, and maneuver it through a jaw-droppingly exquisite post-apocalyptic environment to the atmospheric soundtrack provided by - appropriately enough - none other than trip-out chill room adepts The Future Sound of London. 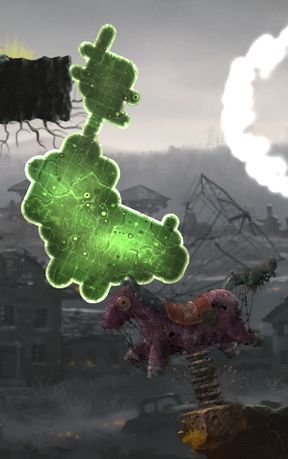 The unique bit here is that you don't move yourself one bit. Instead you sculpt away at unwanted bits of you with the mouse, and let the colony naturally regenerate itself in other parts of your bloopy form. The result is fantastic. Squidge through tunnels, around ledges, between dangling platforms. Split yourself into two. Or three. Trip remote switches to activate machinery with one bit of you, while interacting with the mechanism using the main section of your mass. Extrude your bulk and shape protrusions to capture and absorb bizarre mutated plant and animal species. Explore a lavishly illustrated environment, solve ingenious puzzles, confront and outsquidge outlandish boss creatures and master futuristic industrial machinery and bizarre sci-fi alien contraptions dreamt up from a universe just next door. Where most games ask, "Why?", Mushroom 11 blinks innocently at you and asks, "Splortch?"

Shaping your funky amoeboid self is entirely mouse-based, though you can use keyboard too if you like. Left-click or [X] activates an expanding circle of anti-fungal particles which removes cells from a certain area of your mass, and the cells regrow elsewhere to keep a constant size. You don't get to pick where however, they'll just regrow around you anywhere there's room. The circle will grow up to a certain size and then remain constant, enabling you to drag the circle around and gradually trim yourself to shape. For a finer trim, right-clicking or [Z] will result in a smaller circle. It's a bit like patting clay into shape, and you can create ungainly tall shapes that will tumble to the left or right due to gravity. Or just eliminate cells to your left to respawn across the terrain to your right, allowing better movement once you get the hang of it. Though it clocks how long you take and is full of hazards, Mushroom 11 actively encourages exploration. Though you can and often will completely flub your objective, consigning your entire fungal colony to some unspeakable fate, there are no points and only a glancing penalty for failure; you'll restart back at the last beautiful flowered checkpoint, ready to tackle your objective again. Because these are so frequent, Mushroom 11 invites you to take risks and try new approaches and solutions. You can spend minutes lovingly sculpting your mass into just the right shape and see if that will work, or you can haphazardly eliminate wide swaths of your fungal form with the large circle, careening around like gangbusters as fast as your regrowth rate can carry you and hope you'll make it through this time. Even if you deliberately eliminate nearly all your colony somehow one living cell will always remain, ready to respawn the entire colony once again the moment it lands on solid ground. 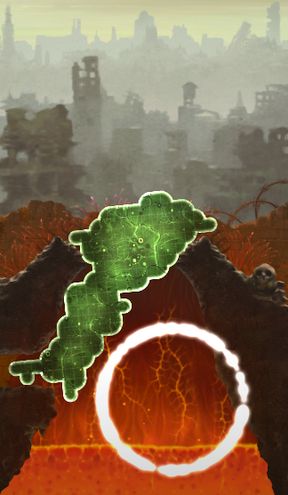 Original in premise, breathtaking in visuals and creativity, unique in character and spot-on in its music and sound effects, Mushroom 11 does just about everything right. It's one of those rarities that doesn't come along often in the crowded gaming world that's so often derivative. Like its protagonist, Mushroom 11 manages to be so many things at once - you'll be mastering its ingeniously inventive puzzles and carefully shaping your form to get just the right shape, when along will come a madcap rush challenge like a mining cart on electrified rails that you must somehow manage stay in as it veers and bounds along and physics does everything it can to launch you just about everywhere else. Every major hurdle will show up just after a savepoint though, so no matter how many times you ragequit you're always motivated to come back and try it again and the persistence does pay off, sorting out in the third try on reload what you couldn't manage in twenty consecutive attempts. Designing a game where you as a mass of fungus is certainly an interesting choice, and one we wouldn't have encountered a generation ago. Remember when games were about nice themes, like cribbage, Monopoly or chess? Alright, maybe those last two aren't especially good examples but we're hoping that humanity gets back to more wholesome gaming concepts before they actually get around to inventing holodecks. The beautiful post-apocalyptic setting, and some very inhumane recurring thematic elements — such as a puzzle taking place in a fully-functioning sci-fi abattoir — resounding earned the game its O Rating with us. This isn't a game you'd buy for your ten year-old unless your plan is to put him through college on a Manson Scholarship. Whatever our collective attraction to nebulous formless masses of unsavory substances, Mushroom 11 brings the originality and fun levels on par with World of Goo, and if you can cope with the grotesquery and yuck factor this comes quite recommended.