When there's something strange, in your pyramid's elaborate system of carved hallways and airshafts, who ya gonna call? Mummy Busters! Actually, since the mummies seem to just be minding their own business before the player shows up in this puzzle platformer by Dharmasta AW, maybe it is we who are the something strange. Of course, if they just wanted us to leave, maybe the pharaohs shouldn't have included so many spike pits and poison gas rooms in their burial chamber. Just a thought. You must kill all the mummies in each level before proceeding on to the next, using the [WASD] or [arrow] keys to move and jump. While the pyramid is full of traps, most are as deadly to the mummies as they are to you... with the exception of the aforementioned poisoned gas. Removing your lungs and putting them in a canopic jar doesn't seem so silly now, does it? Clicking a mummy, or hitting the number key that appears above it, will switch your position with theirs. 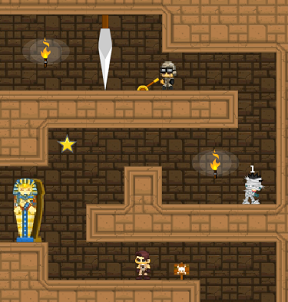 As they tend to just shamble forwards, you can guide mummies into traps to kill them. There are darkened rooms and passages to be opened with levers, and some levels feature vulnerable humans who must also be protected by the mummies' deadly touch. Each of the twenty-five levels also has three stars positioned within, that must be grabbed to get a 100% rating. Though its visuals are a bit generic, Mummy Busters has a really classic feel to its gameplay, like it was a remake of some quality Lode Runner-era DOS puzzle game. Maybe it's not quite the 8th wonder of the world, but Mummy Busters introduces elements at just the right pace to keep things entertaining, and even if a few levels are frustrating in the timing skills required, it'll keep you walking-like-an-Egyptian back to it.

Very nice game - stylish graphics and solid puzzles. Overall, I think the puzzles could've been made even more difficult through timing constraints, or more mummies moving around. Puzzles with mummies just standing stationary don't really add to the difficulty. Looking forward to the next version! -M

Very nice! Light and refreshing, some trickier parts but nothing to break one's head about. Catchy soundtrack too!

It's not possible to 3 star every level due to some of them having walking women who you can't allow to die before killing ALL the mummies.

Do NOT drive yourself insane trying to 3 star these.

Which level are you not getting 3 stars on?
You CAN get 3 stars on all the levels.

You can definitely three-star all the levels, as I've done it. There are a couple where it's tricky, but it's doable.