Mr Rescue! Help! A bunch of people are trapped in a burning building and only you can save them! Now that you're inside, it's time to be a hero. Mr. Rescue is a simple but amazingly charming action game from Tangram Games. You control the well-protected Mr. Rescue himself as you spray water on fires and climb through a burning building to save the innocent people inside. The best part? You rescue them by throwing them out the window! 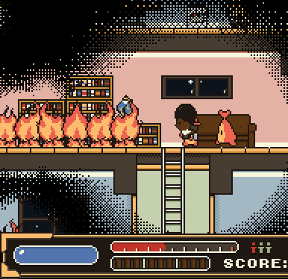 Press the [S] key to jump and [D] to fire water (joystick support is also included). You have a short supply of the liquid stuff, so you have to wait for it to recharge between blasts. Your suit slowly heats up the longer you stay in the fire as well as the more you come in contact with flames. Stay cool, both figuratively and literally, or you won't end up being much of a hero at all. The [A] key allows you to pick up (and throw!) people, but be careful not to toss them into a burning blaze. Head to a window, blast it open with water, then send them to freedom!

There are three levels in Mr. Rescue, each of varying heights and degrees of complexity. You can make as many runs as you like through these buildings, each time attempting to better your rescue rate and score. It's a simple set-up that doesn't need anymore than it already provides. A great little game that'll make you feel like a hero! And P.S.: do yourself a favor and grab the soundtrack by Simon Larsen.

Cute game. My only complaint is that I never know how many people are in a single map. Sometimes it's like 3, another time there were like 8, so I spend a lot of time trying to go through each room to make sure I haven't missed anyone only to die because of overheating. I guess it adds to the difficulty of the game but the layout changes each time as well, so I can never actually get good at creating a plan of action.