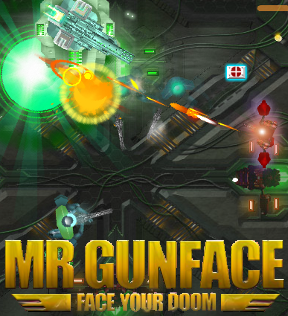 Remember the days of school yard name-calling? There were favorites like 'doodoo head' and 'cootie breath', but what about 'gunface'? No? Never heard of that one? Well, the character of Rinse Games' arena shooter, Mr Gunface, probably heard that lots (assuming drones have recess... or even go to elementary school).

You control the gunface drone to save the planet against the Zenoba invasion by shooting the many guns on its face (surprise) with your mouse and moving with either [arrow] keys or [WASD]. The controls feel somewhat loose, but the killer graphics help make up for it. With endless upgrades to your arsenal and 30 levels to battle through, it's up to you whether this ends in glorious victory or waking up in the infirmary with a concussion. Either way, prepare yourself for a trip to the principal's office cause drones fight dirty!

Runs very poorly even at Low graphics on this computer. The SFX can't be wholly shut off, pressing the button to mute them muted the gun sounds but not the enemy explosions and some other sounds.

The enemy AI has a bad habit of spawning tanks right on top of you, leading to significant damage. This is especially aggravating because your enemies have such huge hitboxes.

Even more annoying, the area you pick up coins from is way too small. I haven't been able to get the coin-picker-upper unlock because I can't pick up enough coins.

As per Vebyast, not only do the enemies that spawn directly on top of your drain your health, they also stun you while your health is dropping, effectively trapping and mauling you to death.

With no magnet option, you're also stuck collecting coins and items from a very limited range.

Game became significantly harder and moving toward unplayable as its self-defeating.