Terry Cavanagh and Stephen Lavelle's Moving Stories is part player-driven experimental narrative creation, and part packing simulator, as you control a young woman who's trying to figure out what to take with her as she moves out of her apartment. The catch is she's got limited space, and you can only take what will fit in her small suitcase, with different items being different sizes and shapes... and no, you can't rotate them. What you take and what you leave behind changes the dialogue and the reason you're moving... you could be leaving because she's moving in with someone, breaking up with someone, or, well, you'll see. You won't know until you finish packing your (occasionally strange or saucy) items and throw the rest out, and see who comes to the door after and why. Each time you replay, you'll also unlock new items to pack. It's a simple game on the surface, but also surprisingly addictive and clever as you discover what different combinations of items grant you. 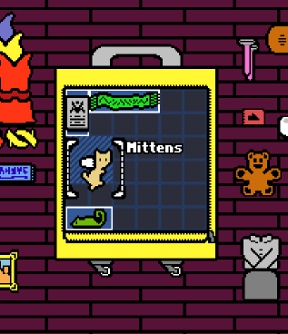 If you asked me to think of one word to describe Moving Stories, it would be "clever", and also "charming", because I don't conform to your arbitrary descriptive limitations, maaaaaan. The stories you craft by assembling what you're taking, though mostly just limited to a few lines of text at several points, can be sweet, sad, funny, or just plain strange, with the unlockable items giving you incentive to play and organize again and again to see what new combinations you'll discover. They can even change subtle things about your environment! Each playthrough will only take a few minutes, depending on how fast you pack, and hey, who says you have to pack everything you can, or even anything at all? There's a remarkable amount of content to uncover, and doing so is part of the addictive appeal, turning a short, simple game into something you may find yourself fiddling with for quite some time.

Thanks to Twilightsparkle for sending this one in, my faithful student.

well that was highly disturbing....

Did anyone else notice

And, how many total additional items are there?

OK, someone has to compile a list of all the endings and extra items.
I've gotten

You always need to pack the passport.
Regular clothes will get you moving in with a new boyfriend and a talking to from your mother.
Suit only will make you a business lady moving for business purposes.
Suit + gun will make you a spy.
No regular clothes will be a break up apparently.
Not packing anything will result in you becoming a nudist renouncing all material things.

Yes, the more you take it, the more it grows. I've got it up to 4 high and 7 long now. It doesn't fit in the suitcase anymore. It's sad that she has to leave such a glorious possession behind.

Is there ANY ending where you get to keep Mittens?

Also, I have a feeling that adding the severed hand with other objects will make you a serial killer of some sort. Of course, that's just speculation.

If it doesn't fit in the suit case I guess it wouldn't fit in her too anyway.

If you click ready without packing anything,she gets naked

Are there any repercussions for not packing within the time limit?

I tried it a couple times. The timer hit zero and nothing happened. I was able to continue playing normally.

You can take Mittens with you, she just doesn't go in the suitcase.

After taking out the garbage, there's a cat carrier under the can. You click on it then and you can put Mittens in it.

I think you will find that your character is not the one who ultimately takes Mittens, however, leopardmask.

After you trash the rest, you will go back into the flat and shoot your cat.

profilumum, you just need the

suit and handgun (and passport, of course)

for that to happen.

I've only moved 3 times and am a little disappointed that

so far, I haven't been able to take the car with me, only shoot it when I was a spy.

it got larger even when I didn't pack it.

Too bad there isn't a walkthrough for this game yet, I would have liked to know if I missed any of the possible endings! Anyway I liked the subtle differences in dialogue, like

in some playthroughs the ex-boyfriend would say "Good luck on moving to your new place!" and in others he would simply say "Oh, bye." Also, ukelele music plays at the end when you pack the ukelele.

You get a few odd ones. I am calling it the twisted adult version.
If you pack everything except

For an amusing business move pack

If you go to the cat before you take the bin out Mittens purrs.