Join the zany action and the crazy contraptions, because the fun is catching, it's Mousecraft! A puzzle game by Crunching Koalas that plays like a mix of Lemmings and Tetris, Mousecraft has you step into the paws of Cat Scientist Schrödinger. Which is to say, a scientist who is a cat, not scientist of cats. Just wanted to make that clear. Anyways, Schrödinger is hard at work trying to unlock the secrets of a mouse-powered machine. Sadly, recent Cat Science budget cuts has reduced his pool of test subjects to a trio of sightless specimens, and you'll see how they run head-long into all kinds of danger. You'll be using everyone's favorite four-segment dropping blocks, tetrominoes, to make a path to their cheesy reward, but of course, it's never that simple... Each of the game's levels has you helping Schrödinger in his experiment by leading at least one of the three blind mice to the cheese pad. Mice will travel in the direction they are facing until they meet with an obstacle. They can jump up one block level, but anything more than that, and they'll reverse course. They can also safely fall up to three block levels, but more than that, and they're off to mouse heaven. Unless, of course, something is there to catch them, like a pool of water. Too long under, though, and they'll drown. 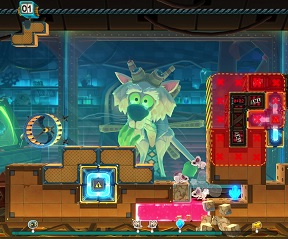 You'll pick up the tetrominoes from the conveyor on the top of the screen, rotate them with right-click/[spacebar], and place them with left click/[enter]. They follow the Tetris rules of dropping, so don't worry about them tilting over. When you are ready to set the mice in motion, click the Play button or use the [e] key. You can also use this to speed up the action to get mice in place faster. There is also an "active pause" system that will let you freeze the action to place blocks. Most levels will also have Anima Shards that the mice can collect by walking over them. Scoring a Perfect on each level requires all mice make it to the cheese and all shards collected. Over time, new elements are added to the levels, like the mouse-chomping robot ratoids, bombs to blow up blocks blocking the way, crumbling, explosive, and acidic tetrominoes and so forth.

The puzzles are the focus of Mousecraft and they are very well done, indeed. Simply getting the mice to the cheese is usually easy enough: it's collecting those shards that will require cleverness and indeed the game makes you feel quite clever when you do. (Maybe this will make it a good game for children to play with their parents or older siblings.) Truthfully, the difficulty curve is a little eclectic: as more elements are introduced, the levels certainly get more complex, but the challenge of beating them varies. That said, while the levels could be ordered more gracefully, each one is solidly designed and substantial to play. One sour note, however, is the included level editor which actively seems to resist you sharing your created levels with others. The developer has promised updates to allow easier sharing, though, so fingers crossed.

Visually, Mousecraft has all the slapstick cartoonishness of an interactive Loony Tunes episode, though it doesn't quite deliver on its promise of humor. Schrödinger, with his labcoat, argyle vest and steampunk goggles has such an engaging design that one wishes that he was given more to do in the game than just paw around in the background and react to things going haywire (indeed, the players are likely to miss some of his funniest expression as they'll tend to come at the very moment you're trying to prevent your mice from exploding or something). While like the original Lemmings, the humor inherent in the premise goes a long way, the gameplay of Mousecraft ends up being surprisingly technical and precise. Of course, it's also quite addictive in that "Okay, one more try!" kind of way, which undoubtedly counts for a lot more in the final estimation than whimsy. All in all, Mousecraft is smart enough to take exactly the right elements from its inspirations and combine them in a mass of puzzles anyone looking for a good logical brainteaser can appreciate.

5 Stars for the mice trapeze reference. 0 stars because you need to but it. Oh wanh...