Ah, it's a full moon tonight. How romantic... Except that you're out of cigarettes, it's late at night, all the shops are closed, and your only chance is a vending machine clear across town. You put on your jacket and your shoes, getting angrier and angrier at yourself. By the time you're out the front door, you feel this RAGE taking over you, like, like... like an animal has been awakened within you! The clouds part, revealing the moon... and you turn into a werewolf. Fangtastic! 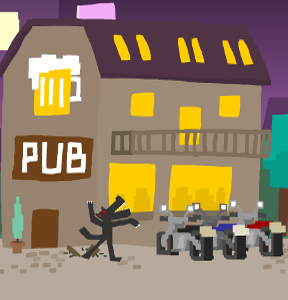 Moon Waltz by Major Bueno is the sort of game you wish you could have made yourself. It's so very short and so deceptively simple, and yet so full of win. It proves that you don't need a lot to make an entertaining game: one wacky idea, one button, some silly graphics.

Now, for those of you expecting the werewolf to dance, it should be mentioned that there's no actual waltzing. You use the [spacebar] to control the clouds. When they are covering the moon, your guy is a normal person. When the moon is out, he turns into a deadly flurry of claws, teeth and fur. The trick is to know when to keep the human form and when to go berserk, because the consequences could be dire. The other trick is to react quickly because the protagonist is walking all the time, and there's no way to pause the game, so you'll just have to improvise and play it over and over again, as there are alternative endings based on your decisions. The best thing about Moon Waltz is how much fun it manages to cram into a few minutes of gameplay. There are actual laugh-out-loud moments, especially because you have no idea what will happen when you experiment with your lycanthropic form – and man, oh man, is it fun to scare hipsters.

What's driving me crazy though,

I got the cat to follow me the first go round, and now I can't figure out how to do it again!

I'm not exactly sure this works all the time, but I've tried three times in a row just now and it worked:

I think this "game" is just too dull for me. No challenge. Just pressing space. Meh....

Great game. So far I got three endings:

Going to jail, knitting with the kitten and going to the moon.
How to go to the moon: Kill the guys that want to mug you, so you have money for the cigarettes at the end. Don't destroy the cigarette machine. Go all the way back to your house without getting killed or arrested.

Did anyone find other endings?

Yeah, I found another ending.

Getting killed. Basically, go on a rampage more or less the whole time.

You don't have to kill the muggers. I found the briefest of freak-outs was enough to make them back off.

I found one other ending

Turn into a werewolf when the priest pokes his head out the church door. He'll follow you and if you let him, he'll shoot you. This gives you an ending at your grave site with the cat sitting on your tombstone.

If you turn into a werewolf and scare the guy beside the girl, he'll run into her and you'll get an achievement

If you scare the muggers before they can rob you, knock over the biker's bike and win the bar fight, buy a cigarette, then win the fight against the bar owner on your way home, you'll light the rope from the dog house that is actually a rocket and get the moon ending with you, the cat, and the bar owner present.

After going to jail wait until officer come closer and then press space for a while :)

and this one is not too different but

After going to jail press space while officer walks towards you. When you turn into warewolf he will scare ang go back :)

Not an ending, but a few neat tricks:

I just love that attention to detail.

I love these games with multiple endings. I'm not sure how I got it, but�

in one ending the police office who arrested me turned out to be a werewolf himself. We fell in love and he let me go!

mug the muggers if you wait til they mug you, as you walk by you can wolf out and get your money back.

I can't figure out how to get arrested, is there something I'm missing?

While going to vending machine, kill any person on the way (you will see a pool of blood below the body). On the way back, policemen will be at all the murder sites (other than the priest's). Near any police, turn in werewolf and police will chase and cuff you.
Its difficult but you can kill all the police by pressing (and releasing) space at correct moment. There is no alternate ending on accomplishing that but its the toughest challenge in this game so far.

Is there any other possible outcome from scaring people?

The moustache man in suit if scared off in other direction will actually run into a tree and knock himself out. Other than that I see nothing else.

Press space right infront of the sad man he will run and meet the pretty lady infront of the church, when you walk back you will notice they had fallen in love.

You guys! Excite! Another ending!

If you go to jail by first killing all the people and turning into a werewolf when the police arrive but not killing all of them, you can get another ending! When the condescending officer comes to shake his head at you, trigger the full moon. I knew there was love in it for the main character somewhere!

You gotta wait until the officer is shaking his head at you. Otherwise, he just freaks out and leaves.