You might know that they sent monkeys into space, but the fact that these may be lady monkeys probably isn't very important to you unless you're the loveless primate hero of HighUp Studio's launch game Monty's Moon. Unable to find a gal, Monty believes his best chance for love is somewhere out there in the Black, and thanks to a similar simian scientist who can build all sorts of cannon accoutrements for an omnomnominal banana fee, Monty might just be able to reach the moon and find the lady of his dreams. Click to launch Monty when the arrow on the gauge is as far to the right as possible, and steer him with the mouse, nabbing 'nanas and avoiding birds and the like, which will slow you down if struck, and netting mystery power-ups you can activate with a double-click. After each launch, you'll be able to spend the bananas you earned on upgrades that will help you fly farther in different ways. While you can skip the fall animation after a failed flight, you may not always want to since you can grab bananas as you fall, too. 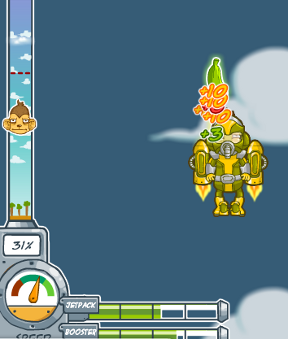 Monty's Moon doesn't really do anything new with the launch genre, but it does it very well, with a polished presentation and a quirky sense of humour. The sheer amount of grinding required won't appeal to everyone, however, and it doesn't seem like Monty follows your mouse as quickly as he could or should, which makes quick reflexes at high speed sort of moot. It wouldn't grate quite as much if there were a bit more variety in the sky instead of the same birds and backgrounds on and on for so long. Though it could have used some more fleshing out, however, Monty's Moon has charm and style to burn and makes for simple yet fun arcade action on your beverage-of-choice break.

It's like a well done skin of many launch games. I was really hoping for more.

I'd like it better except there's moments where it seems like it just flat out does not read my input during flight even if I'm not going that fast.