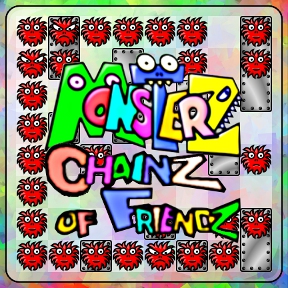 Friendship is a beautiful thing, especially when you've found the perfect friends. You know the ones, those who are there to lift you out of a blue mood with a smile, those who let you know you're not alone, those who make you feel like you belong. Monsterz: Chainz of Friendz, submitted by Jean Privat for CGDC9, reminds us of the joys of friendship which seemingly are just as important to monsters...I mean monsterz.

In this simply presented puzzle game, use your mouse to form chainz between monsterz of the same color. To form chainz, select the monster type from the menu to the right of the screen then either click on individual squarez, or click and drag to create chainz. The expressionz on the monsterz facez say it all; Monsterz that are not part of a chain have sad, lonely facez, partly constructed chainz show monsterz with relatively neutral facez, while monsterz who are connected in a full, but not necessarily correctly laid out chain, will exhibit expressionz of joy. But monsterz who have more than two neighborz of their own kind will feel overcrowded and will subsequently have angry expressionz, so chainz cannot cross over and must be in a single line.

Hover your cursor over the menu options and a brief explanation will appear underneath the monsterz grid. For example, the splash icon is an eraser which will remove mosterz from the grid if you wish to rework a chain, although you can simply reclick on a monster to delete if it's already selected in the menu. The game is automatically saved so you can continue from where you last played, or you can clear the saved data to start the entire game from the beginning. There are two ways that levels can be solved; simply connect all the monsterz on the grid, or to gain a gold score for each level add the maximum number of monsterz to par the levelz. Each and every monster must be part of a chain. The ability to see the par number for each level is unlocked after successfully completing level five. On completing level ten, the level editor is unlocked allowing you to create your own levelz. 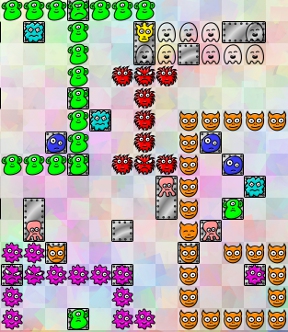 Analysis: Monsterz: Chainz of Friendz may look familiar to many. Jean Privat openly discloses that he borrowed the images and music from a game called Monsterz which was created by Sam Hocevar back in 2005 and whom made the game freely available for redistribution and modification. While it's great to be mindful of recycling, it's a bit of shame that Jean's game is not original in its presentation. This may be a reason why Monsterz: Chainz of Friendz didn't score as highly as Jean had hoped, but it still made it into the top ten games of CGDC 9, and it's not hard to see why with all the positive feedback from you, the invaluable members of the Jay Is Games community. Without a doubt Jean has created a monstrously fun game that adheres strongly to CDGC 9's "Friends" theme.

In terms of gameplay, the mechanic is fairly smooth with only slight awkwardness in selecting and de-selecting monsterz for adding and removing to the game board. The difficulty curve is just right, starting out with some really easy puzzles and finishing with five challenge levels that can only be completed by achieving par for each level.

This is the kind of game that really gets you thinking, as you try to work out how the heck those monsterz can be connected. You may be a strategic forward thinker and plan your moves based on the placement of monsterz already on the grid, or you may be a trial-and-error type player creating chainz only to erase them just as quickly. Either way, there will be moments when a solution is suddenly crystal clear and you'll experience that wonderful feeling of self-satisfaction that only a challenging casual game can provide.

The beauty of Casual Gameplay Design Competitions is the interaction between game developers and the Jay is Games community. Jean responded to comments from the JiG community and implemented suggestions quickly, so it can be said that this final version of Monsterz: Chainz of Friendz is a true collaborative effort, and one of the appealing aspects of the game, the monsterz' expressive faces, is a result of that collaboration. And when a game developer really listens and responds the way Jean has, those games find their way into our favorites.

So next time you're feeling a little lonely, spare a thought for the monsterz who without your help would otherwise remain sad and disconnected, and spend time playing Monsterz: Chainz of Friendz. Guaranteed you'll feel rewarded for playing, even if it's just to see those little monsterz' faces light up with joy.

The final formation looks like an almost complete square with a dent in the top right corner.
Screenshot.

Challenge Level 4
Thanks to Joao for helping out with a solution for this one!

Challenge Level 5
Thanks to SUPREMINATOR for helping out with this level!

Thanks to Buttons, Keith , Joao, and Supreminator for your hints and help!

I really loved this game. A little sad it didn't rank higher, but yeah, at least it's in the top ten.

I am obviously doing something very wrong here... can anyone explain WHAT, exactly?

To wit: I am on Level 15, without the slightest idea of how to proceed. So I am doing the following reasoning... "Well, there are monsters in the perimetral wall, and since they can only be reached through the square directly in front of them I am better off if I place all the "obligatory" monsters in place first.

But if I do that, some end-of-chains become immediately blocked off and unreacheable.

that there is an additional, EXTERNAL ring of free squares which makes everything much simpler.

@ Tracian:
I don't have a screenshot for you just yet, but here's the Par solution for level 17.

I loved this game, too, Buttons :)

I am quite very stuck on level 21 and have been since the time of the contest, though. Now that the game is featured on the main JIG page, I've my fingers crossed that someone will post a complete walkthrough with hints and images... or at least with hints. Pretty please??

@ elle
I'm currently working on a walkthrough but am stuck on C4 so hoping for some hints for that level. :)
Par solution for Challenge Level 1:

Now fill the rest of the grid with yellow monsterz.

you bring the red line down to the fourth row on the left edge, the cross left and hook up. The orange line then hooks down to fit.

Chicktionary:
Here is the solution for C4. Got it after a looong time.
http://tinypic.com/r/15dp81v/7

Does anyone have some hints for C4?

Stuck on 20. Where do I start/end the light blue and green monsters. I can handle it from there me thinks!

@ Yo:
The end points for your green monsterz are:

The light-blue monster end points are:

@ Paragrin:
I got stuck a few times in the early levels as well. : )

The final formation looks like an almost complete square with a dent in the top right corner.
Screenshot.

Challenge Level 4
Thanks to Joao for helping out with a solution for this one!

Challenge Level 5
Thanks to SUPREMINATOR for helping out with this level!

Thanks to Buttons, Keith , Joao, and Supreminator for your hints and help!

Orange
Orange starts at bottom left monster
2nd to bottom row is almost all orange (some yellow)
Orange continues to zigzag to orange monster near center of map.
Then proceed to right side where 5 total pieces will touch the right side of the map (including starting orange monster)
Then left up left again and down to finish the orange chain.

Pink
2nd to top row is almost all pink
Rest of pink weaves in between 2 yellow rows in center.

Thank you so much! That is awesome :)

Had to come in here and mention how hilarious the review waz. Too funny!

Add two monsters to the right of the top left red monster. Then the rest of the the outside edge monsters are blue.

Hint for Par on 20. Per the existing walkthru...

#243 Lower left side. Tweak the green chain up to the left to allow one additional light blue monster to be placed above the end point.

#244 Lower right corner. Add a fleshy pink underneath the end point... and move the rest down to fill in the the corner.

Boo. Got Par on every level and nowhere did it say I was extra special sauce awesome for doing so. Boo.

Sorry. I was very busy lately so I just take the time now to write something. I'm very glad that some people really enjoyed the game (although it did not perform so well during the competition).

For yo: You are special sauce awesome.

by extending yellow 1 further up at the final bend, so that you meet the "metal" one straight from the left, you can also place 1 yellow down from there, earning you 1 monster.

By extending the red chain to go all the way into the top left corner, you can place 2 extra cyan: one to the left of the top-left cyan guy, and then 1 up from there.

Explanation based on the answer currently presented in the walkthrough. I hope this helped :D

Yay spammage, but I got par on level 15 as well:

Think outside the box! Some of the chains that are inside the box can extend outside.

The green guy on the left can go outside and go up from there.

The purple just below him should go out and downward.

The top left yellow should instead be extending INTO the box 1 square.

I'm on a roll apparently :D

By running the green chain from the bottom left corner up to the left side of the metal green monster, you can extend the end of the cyan chain 1 square up.

Meeting the bottom right magenta monster from the bottom, and letting the cyan chain touch the left side of that monster, you can extend the end of the pink squids 1 down.

I just saw that yo already has provided the hints for level 20, but I'm keeping it in this post anyway :P