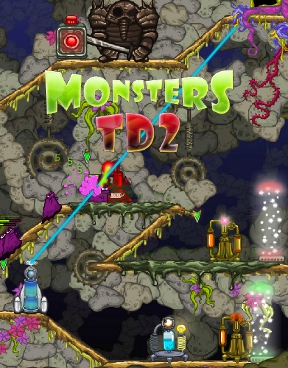 Booblyc's beasties are back with Monsters TD 2, the sequel to the original tower-defense game that's all about making monsters go splort before they find their way into our world. In each level, monsters will appear in waves and head towards the portal at the other side. By clicking the gray blocks along the path, you can build various towers (provided you've got the cash) that will stun or damage anything within range. As the game progresses, you'll unlock potions that you can click on at the bottom of the screen to deploy devastating damage or other status effects. Perform well and you'll earn crystals you can spend on upgrades between stages.

Monsters TD 2 is essentially the same game as before, albeit with tweaks and upgrades that make it seem more like an expansion than a real sequel. The new laser tower, for example, is handy for large groups of monsters, and the expanded upgrade tree gives you more reason to strive for crystals. Neater, however, is the construction of the stages themselves, with terrain that can bestow both negative and positive effects to the monsters and even powerful creatures that you can use to your advantage. It may still be a little too familiar if you were really hoping for some sort of massive change, but in a way, Monsters TD 2 is smarter than most since it focuses on keeping everything you enjoyed and trying to both up the challenge and address previous player quibbles. It's a solid upgrade to an already enjoyable game that will let you keep closets and spaces under beds safe and monster-free... with lasers, fire, and executioners.

I honestly thought you guys were reviewing an old game until I read the middle of the review.

Putting a 2 on that was hardly necessary. Remind me of the disappointment that was Earn To Die 2012. They would have been better off putting the word expansion on it. I would rate this game but I only (re)play the first three stages before getting bored of what I already done. Who knows, maybe they really did improve on it but honestly from the get-go I don't see anything different and that don't really encourage me to play.

The maps are still too big and require some awkward zooming. You can't read the stats unless you're zoomed in all the way, and they you can't see enemies.

They added 1 tower type and some enemies, but the rest is too much the same, not very interesting.