Seems we've been on a cute kick recently, but who can blame us when games like Monsters Ate My Birthday Cake, by Sleep Ninja Games, come on the scene? This gorgeous game is part logic path puzzle, part adventure game, with our favorite elements of dungeon-crawling (the loot! the costumes!). You play as Nico, the most adorable little monster-hooded boy you've ever seen, whose weenie dog has discovered the theft of your birthday cake before running off in pursuit of the cake thieves. And as a good puppy owner, you must chase after him, which will obviously get you into all kinds of trouble. Fortunately, you live in a town where (most of) the citizens support your adventures, have oodles of treasure just lying around in their homes, and all have something witty to say to send you on your way. So you follow the trail of cakecrumbs, and your barking pooch, out into the wild to try to recover the cake. It's your birthday, after all.

Once you leave your village, you discover you're on an island, and you'll have to make your way through four ever more difficult maps to meet all the monsters who will help you - as well as the ones who will hinder your progress. Along the way, you can choose to do any number of little side quests, which give you opportunities to gain money, information, items for other quests, and even characters to join you on your journey. Most stopping points on the map are logic path puzzles that quickly increase in difficulty. In the first few locations, Nico can find the cake and treasures himself, but before you're a third of the way in to the first map, you'll need your new monster pals to cooperate on the intricate moves that will get you through the levels. Each character has one or more abilities that can be used to meet the challenges and overcome the obstacles. And don't forget the Boogins. Those monster bosses are trying to do more than eat cake - they want to take over the entire island.

Analysis. To begin with, it's an absolute joy to play a self-contained game with no in-app purchases, ads, or insistence on liking the game on Facebook. The game is completely immersive, not least because the story is wonderful and witty. On the other side of that equation is perfect artwork for a comedy monster game. Nico can purchase a closetful of costumes, some of which give bonuses, from floating to mimicking the abilities of one of your monster friends. The mechanics are easy to pick up, but you'll often find yourself scratching your head over a level that requires someone in one corner to toggle the spikes in another corner, or to burrow under the ice, or avoid rainbow lasers. There's also quite a bit of meta-play built in to the game, meaning many levels have been purposefully created to be replayed. Some stars can't be won without dressing Nico in a specific costume for example, which can be bought at any store, but only if certain quest items have been acquired. 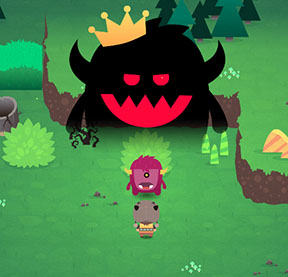 The difficulty curve is a bit high compared to other games in the genre, but that's mostly because the levels are larger than the screen, and there's no way to zoom in or out without creating a path. This means figuring out the logic will either require a great deal of trial and error, or lots of switching between characters to see what their part of the level looks like - or both. In an otherwise excellent game, it's the only thing that can take you out of the story. And then, if you do make a wrong move in one of the over-sized levels, it's back to the start for you! They should let you cry little cartoon tears when that happens, especially if you're this close to finishing!

No challenges are too much to overcome, however, especially once you lose your dog because of course rescuing him takes precedence over liberating your lost cake. And ultimately helping all of your friends, new and old, really takes center stage as the game deepens. This game's full-on, well-developed humor combined with a depth of play and story that are unexpected have us crowing and hooting and eeking along with Nico's monster friends, and you'll invest your heart in saving his little island with a smile on your face.