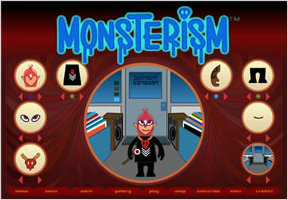 For a few years now, Pete Fowler has been creating strange and unusal creatures within the virtual world he calls Monsterism. His creature art has been transformed into collectible figures and sold around the world, appealing to a wide audience and age range. Pete strives to add a human element and personality to the monsters so there is something about them that people can relate to.

Make-a-Monster is a Flash toy available on Monsterism.net, a website that Pete and his creative partner, Simon Pike, built to showcase Pete's outstanding and original monster art. With it you can create a bevy of creatures from the world of Monsterism, as well as mix and match any attributes to create entirely new monsters of your own design. Which monster are you?

Huh? no ones talking....I found it interesting. very good.

This game was okay but it limited on the clothing and hair and stuff........it was still fun though :)

It was cute and kept me moderately interested for a bit. Personally I think it would be much better if you could choose the style and color of most things.

I dunno. I don't like that there's no "undo" button. My monster came out looking worse because I couldn't take away certain features.

[Thanks for the note. Seems the site was taken down. But I found it in the Internet Archives, and now link to that version in the review above. -Jay]