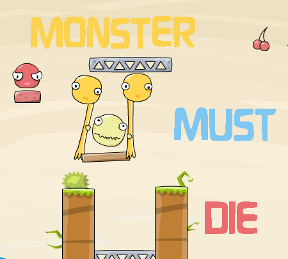 Who can resist helping cute little creatures rid themselves of the monsters in their midst? No one, that's who. Which is why you should play Monster Must Die, a cute little physics puzzle game developed by Alex Orlyanskiy, Lex Lyan, and Aleksey Gulev.

There are four types of critters for you to control, each a different color. Each has its own ability that is activated when the creature is clicked, such as floating upward or exploding. You must use the abilities to eliminate the monster that is on each screen, most often by bopping the monster on the head with one of your creatures, all while collecting fruit. Collecting the fruit isn't necessary to pass the level, but adds an extra challenge for those who are looking for it. There are a few hidden achievements that will win you additonal creature artwork, which is accessed through the main menu. Between the lovable artwork, groovy soundtrack, and 24 levels to play, Monster Must Die will provide you with a fun-filled physics based break.

if anyone figures out level 6, please post it here. i cant get the guy to get all the grapes...

In Level 13, I only see two fruit. Is there a way to beat it with three?

There's an invisible fruit under the other explosive barrel. This also gets you the �Master of Secrets� award.

Does anyone know how to get the award listed below �30 Fruit� and to the left of �Manic Restart?�