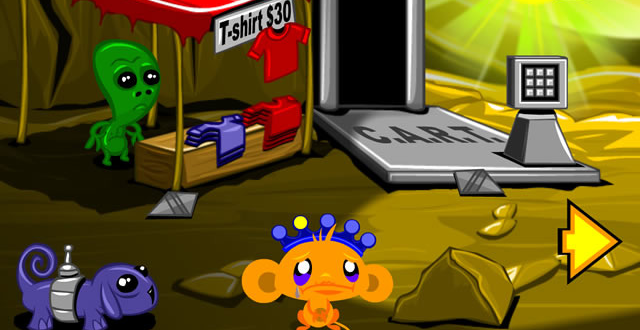 Hello, dear reader! Do you need a bright orange diversion from another drowsy weekday afternoon? If you answered yes then fear not - PencilKids has you covered with his latest adventure! After choosing the monkey and hat of your choice, you'll discover that your monkey is alone in a very strange world. An alien sells t-shirts in exchange for credits, a strange device is missing its laser, and underground puzzles are just some of the puzzles you will encounter.

As usual, PencilKids weaves increasingly subtle and complex puzzles into Monkey GO Happy - Planet Escape, requiring a keen eye and some backtracking the deeper you progress into the game. Of course, should you want the easy way out, there is always a video walkthrough you can peruse. Control the game by pointing and clicking solely with the mouse. The cursor changes when you hover over an object that can be interacted with. By clicking your backpack in the top-right corner, you can access your inventory and click items to use them on the environment, which is necessary several times to advance the story. Arrows on the screen allow you to navigate through variants parts of the scene. Can you get the spaceship missing and round up all ten mini-monkeys to escape the planet and make the monkey GO happy?

Can't wait for the walkthrough to this. Happy Go Monkey games rock.

Well now you've done it. You're stuck on a different planet without a single credit on you. How are you going to get out?

Talk to the armored guard, who asks for his gun. Take the Mini Monkey on the metal archway, and then take four credits on the archway and on the floor.

Go right to a screen on the base of a cliff. The cliff has a grid of nine letters etched into it, together with something else hidden behind a pile of rocks. In front of the rocks, there's a red alien who wants a T-shirt for some reason. On the left side of the screen, there's a device with a lever that shoots lightning! Or at least, a bolt of electricity that should energize whatever fits in the slot. In front of the device, there's a crate with its lid stuck, and there's a rock which you can push aside. Once you do so, you can pick up two credits from this screen and a Mini Monkey.

Go left twice, where the T-shirts are selling for $30 (30 credits, that is.) In front of the stall, an alien dog is waiting for you to do something. There's also an elevator shaft here, or maybe it's called a C.A.R.T? It appears to be summoned by putting a code into the keypad next to it. In front of that, there's a rock which you can push aside. Take three credits, a Mini Monkey, and the taxi card on top of the stall tent.

(Credit count at this point: 9)

Use the grid from the cliffside to determine which buttons to press on the keypad.

So press the buttons at those four corners in order, and the elevator descends, giving you a way up.

The elevator brings you up to a taxi stop, where taxis regularly sail through the air, stopping and going. (But for some reason, you're on a floating platform instead of on the other side.) A green alien is waiting for a taxi, but he needs a taxi card to board. On the cliffside, there are three large lights which change color when clicked, and there's a square hole in the building wall above it. Take a Mini Monkey and three credits.

Go left, where a large dome sticks out of the ground. It has four buttons that cycle through one, two, three and four lines when clicked, as well as an extension that looks like a lever (but really isn't). Behind that, a path between clifftops is blocked by a robotic sentry who has no use for the rifle in front of him. Take it, and take the Mini Monkey, and move the rock next to you and pick up a total of four credits on screen (two of which are camouflaged against metal backgrounds).

Ride taxi, he must

Give the taxi card to the alien, who rides the next taxi out, leaving behind one credit.

Go back down and give the rifle to the guard on the first screen. He runs off with it and you can now enter whatever it is he was guarding.

So you just came down the stairs, and there's a bunch of puzzles on the wall. There's a grid of dice faces, a slot for a lever, and three buttons that display lines in four different orientations when pressed. The alien here seems to be a little upset, which make it difficult to read what's behind him. There's a locked door on the right with no obvious way to open. Take the crowbar and one credit from the floor, as well as the red button and Mini Monkey on the stairs.

What's in the box?

Go back up and to the right, and use the crowbar on the crate. Inside, there's a pot full of alien slime and one credit.

Go back left and downstairs, and give the slime to the blue alien. While he's distracted, take the one credit he left behind, and read the clue on the wall, which has three colored regions.

Go left and up the elevator, insert the red button in the square hole, and enter the color code (rearranged) into the cliffside.

Enter the code (2, 4, 1 clicks) press the red button, which opens a door up. Take the lever, mine and one credit.

Go back down and all the way to the right, and place the mine on the rocks. It promptly blows up and you can take two credits. The explosion also reveals a group of straight lines etched in the wall, forming a downward-pointing triangles.

Go back left and down to the vault, use the lever on the slot, and enter the line code into the three buttons.

The door opens. Take the empty fuel cell, laser and one credit.

Go back to the dome on the clifftops, use the laser on the "lever", and enter the dice code.

Click the lever, which zaps the sentry, which blows up! You can now go to the left.

There's a large pyramid (without a top) here, with a round hole and a triangular clue next to it with stripes, lines and the numbers 5 and 3. To the left of it, a battery holder is connected to two long rectangular displays. Take the dumbbell, three credits and a Mini Monkey.

Go back to the T-shirt stall, and give the toy to the alien dog. The dog moves over to chew the toy, and you can take the wheel and one credit.

Go all the way to the right, and place the empty cell in the charger. Pull the lever, and you get a charged fuel cell back.

Go back to the pyramid, and click on the wheel to turn it. The pyramid slides apart, revealing a spaceship which has a small hatch open on its side. Take the Mini Monkey and two credits.

Go back to the T-shirt stand, and use all 30 credits on the alien. You get a T-shirt, and the price immediately drops to 12 credits!

Give the T-shirt to the red alien on the rightmost screen. After he walks off, take the spare part for the spaceship, and the Mini Monkey hiding behind it.

Use the spare part on the spaceship, which lifts off. You've completed the game! Take the Mini Monkey from under the spaceship.