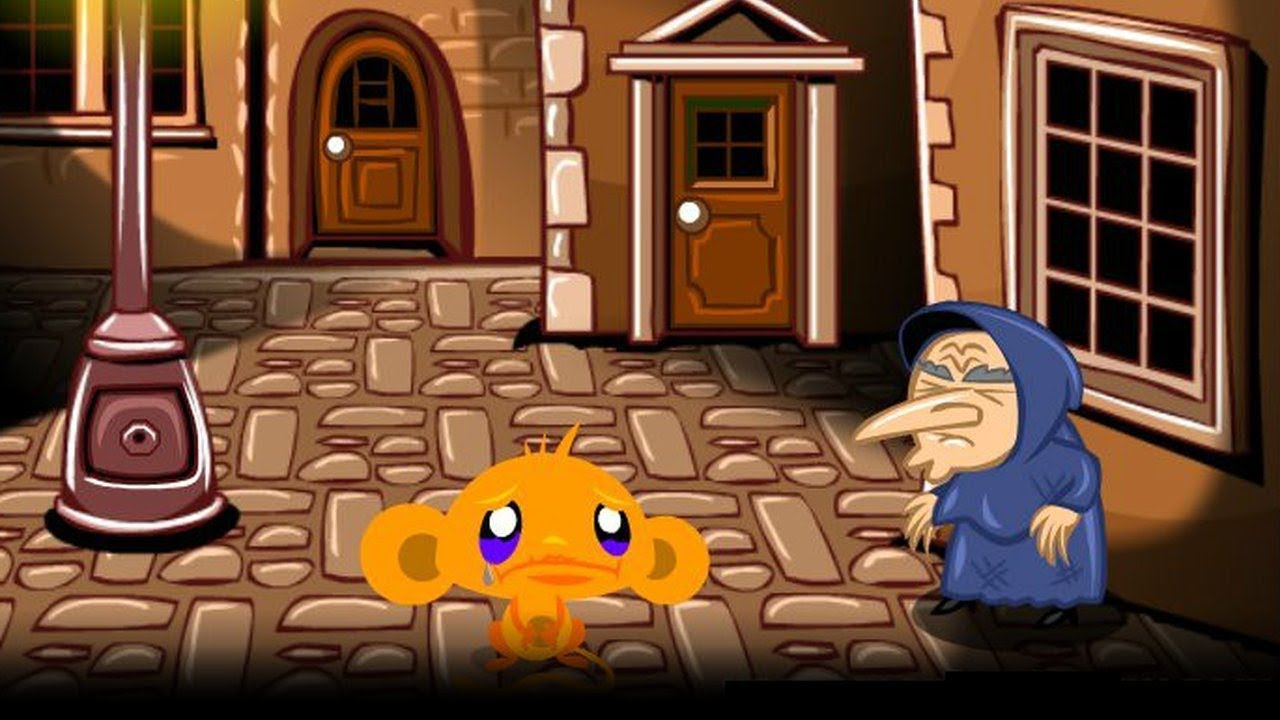 PencilKids is out with another stage of the beloved Monkey GO Happy games, and you won't believe witch predicament the monkeys have gotten themselves into this time! Our orange, pint-sized hero must gather cards for a witchcraft ritual. Along the way, you'll need to crack several codes and help a few characters to find them all. And as usual, there are ten mini-monkeys scattered throughout the game that you will need to keep your eyes peeled for.

The controls are simple - use your mouse to click objects and interact with the scenery - but some of the puzzles are far from it and quite tricky, which is all part of the series' charm. Click on the yellow arrows to move from room to room, and access your backpack in the top-right corner to use objects you have collected to unlock others and advance the story. Help the monkey find all 24 cards and see if the witch has a spell that will successfully make the monkey GO happy!

The witch on the first screen asks for 24 magic cards. Best to start looking around! Pick up two cards from the ground and beside the lamppost, which seems to be fastened shut. To the right of the lamppost, two buildings have wooden doors that open up into other screens. Take the Mini Monkey behind you.

Go left to the alley, where a metal pipe runs down the back wall and opens up next to a grate in the floor (both of which jiggle when clicked). Orange frames surround a safe on the left (taking a sequence of four presses of nine buttons) and a lever slot on the right marked XX, and there are four glowing buttons on the left and right walls which light up with the digits 1 and 0 when clicked. Pick up the two cards on the pipe and the floor.

Go back and through the right door, and now you're in the living room of a man who wants you to clean up a pile of dust next to his lit fireplace. Shift his chair, draw his curtains, and open the cupboard door on the right, then pick up all five cards (ground, fireplace, chair, window, cupboard). Also take the Mini Monkey and a lever handle (which the game calls a "tab"), then read the clue on the wall, pairs of lines and squares over X and XX markings.

Go back, then go through the other door. A lady is too busy vacuuming the floor, presumably keeping it clean for the blue-suited fellows in the portraits on the wall. Those portraits are labeled with roman numerals for some reason, and each person wears a shirt with a different number of buttons. There's a bookshelf with several blue books as well as a Mini Monkey. Take the two cards from the ground, then go up the stairs.

Upstairs, there's a similarly-decorated bedroom with two similar portraits, a locked chest in the lower-right and a locked safe in the upper-left which takes a four-digit code where the digits go from 1 to 4. Draw the curtains and pull the bedsheets, then take the four cards near the bed and the Mini Monkey at the foot of the bed.

(Collectible count: You should now have 15 cards and 4 monkeys.)

Use the clue from the bookshelf to unlock the four-button safe in the bedroom.

So enter that code in the safe to open it, and take a fireplace poker, card and Mini Monkey.

Use the poker on the fireplace in the right building to get a hot key.

You still have the poker, so look for another place to use it.

Use the poker to tap the pipe in the alley, then click on the mouse that runs out of it to pick it up.

Then use the poker to lift the grate in the alley, opening up a passage down.

The design of this screen looks similar to the alley above, having four more of the same glowing buttons. Surprisingly clear water flows through the sewer beneath your feet. A hexagonal hole in the wall to the left opens to nowhere, and a panel on the right wall opposite it has a smaller hole and is marked with an X. The brick next to it has four roman numerals scratched on it. Pick up the two cards in the lower left corner and on the lower ladder rung.

Use the mouse on the vacuuming lady, scaring her away. Pick up the vacuum cleaner and the card that was behind her.

Use the vacuum on the pile of dust next door, and the man walks away, leaving a red button and a Mini Monkey.

Dip the hot key in the water in the sewer to cool it down.

Then use the key on the chest in the bedroom, and take a spanner and card from inside.

Use the spanner to open up the lamppost and get a card.

Use the clue from the roman numerals and portraits to unlock the nine-button safe.

The roman numerals XVII IV VII XIII correspond to the portraits with 5, 3, 4, 6 buttons.

The safe opens so you can take a card and a Mini Monkey.

Use the tab on the XX slot and the button on the X hole, then use the clue from the wall of the right room to unlock the safes.

Hint: there are a total of eight buttons.

The safe door opens so you can take a card and a Mini Monkey.

The safe door opens so you can take... you guessed it, another card and Mini Monkey.

Use all 24 cards on the witch, who turns into a bat and flies away, leaving behind the last Mini Monkey in the pile of cards.

(I can't pick it up in the flash version though.)