Pinball may be just a decade or two from its 100th anniversary, but the genre is far from a fading memory. Momonga Pinball Adventures from Paladin Studios takes the familiar concept and wraps an adventure around it, allowing you to explore a world packed with secrets by guiding characters around with pinball flippers. Take all of that, add a heartfelt storyline and charming artwork and you've got a dangerously attractive arcade game that can capture just about anyone's interest. 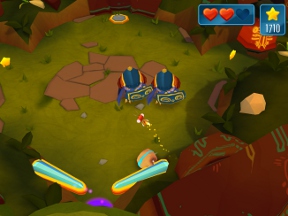 A band of owls turned the peaceful momonga village to ashes, kidnapping its inhabitants and flying off into the night. A single momonga, Momo, survived the attack but was left with a scar running from his head to the tip of his tail. A wandering Lorekeeper found little Momo and took him to his mountain sanctuary to heal. Now, Momo is on a quest to rescue his people from the nefarious owls. And he's got a handful of animal friends to help him out!

Momonga Pinball Adventures takes the basics of a pinball game—flippers, things to bump into, and various marble-like objects to whack around—and places it in an open-style environment. Instead of being trapped on a board working towards a high score, you get to explore a landscape, bust open secret doors, find hidden treasures, defeat a few enemies, and even take part in a few tilt-controlled flying sessions! Momo acts as the pinball, and by tapping either side of the screen you can control the flippers to keep him bounding around the stage. 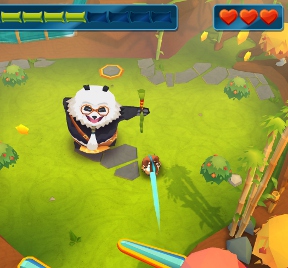 Analysis: If you remember pinball adventure games like Mario Pinball Land for Game Boy Advance, you'll have a bit of an idea what to expect with Momonga Pinball Adventures. It's not just hitting the ball and hoping it does something cool, it involves planning, proper timing, boundless curiosity, and a little bit of luck. You'll also be happy to hear that the game is free from in-app purchases, ads, or any other form of money-nabbing trickery. It's just flying squirrels, pinball flippers, and bespectacled pandas!

Each of the game's nine levels has five challenges to complete, starting with the most basic "finish the level" and moving on to things like finding every secret room, collecting stars, or uncovering level-specific bonuses. You can blaze through the main game in an hour or two, but like any good pinball game the replay value is extremely high. With all the challenges to complete and the endless bonus level to unlock, you won't be hurting for more things to do. And if you are, more Momonga is planned for the future!

Even if you don't find pinball the most fascinating kind of game around, give Momonga Pinball Adventures a try. Half the fun is its simple charm, and the other half is the discovery-based gameplay. It's one of those rare games that makes you excited just to see what's around the next corner. Paladin Studios obviously put a lot of heart into making this gorgeous little masterpiece!