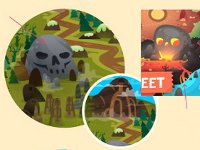 Artist accuses Monsters Ate My Birthday Cake developer of plagiarism - In the ever-evolving saga of inspiration versus outright theft, an artist known as Sounas has posted comparison shots of SleepNinja's Monsters Ate My Birthday Cake with screens of his work from Karios Games' MonsterUp Adventures. The image points to similarities between the games' overworld maps, trees and hills with almost identical shading and patterns, and monster characters with similar designs. Looking down the list, some of the accusations seem like a bit of a stretch, especially the rivers flowing out of the skull. Maybe the Birthday Cake artist was a little too heavily inspired by MonsterUp, but we're not inclined to think it was stolen. There are only so many ways you can draw a tiny cartoon river delta, after all. What do you think? 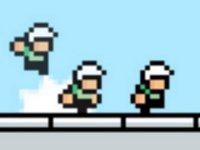 Flappy Bird creator's new game - Did you think the Flappy Bird saga was over? Well, it kinda is, but creator Dong Nguyen is still actively working on a new game. The untitled project will share Flappy Bird's focus on simple obstacle avoidance, only this time there's going to be a multiplayer component. In case you're wondering about the original Flappy Bird, Nguyen is still planning on bringing the game back to iOS and Android in August with a few changes, including new characters, a revamped art style that isn't pixel art, multiplayer, and a cool-down system that forces you to wait a few minutes after every round. 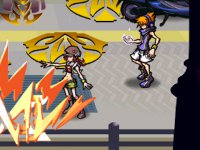 Square Enix RPG The World Ends with You finally hits Android - Originally released for Nintendo DS back in 2007, the Kingdom Hearts-inspired action RPG The World Ends with You is finally available on both iOS and Android devices. Set in the Shibuya shopping district of Tokyo, the game focuses on crowded scenes and combat that's both frantic and surprisingly intricate. The urban-only setting is unique for a JRPG, although it does feel a little odd not to run through a grassy field while hunting things like slimes to kill. Call us old fashioned.

Re: The accusations of plagiarism; how silly.

The second most* ridiculous part of the comparison is the very first point: "The shape of the island is identical". If that's close enough to be considered "identical", then I think both of these folks should be expecting a letter from Nintendo's lawyers any day now: http://2.bp.blogspot.com/-SPFy3jAevmE/TtwP0ptGBcI/AAAAAAAADu8/1ulEZlAvaeg/s1600/super_mario_world5.jpg

All three are set on islands that fill the screen, where the player is expected to progress clockwise from the lower-left, passing through a mountain range in the rear, and finishing in a desolate wasteland. They even share terrifying head-shaped mountain lairs as the final area. But Shigefumi Hino et al did it in 1990.

Simone Legno, Julian Frost, Minoto, and the estate of Chuck Jones would probably have a few words to say as well, among dozens of other artists who are known for using a similar, simply-shaded style with bright colours and Sanrio-esque (Sanrio, there's another company whose lawyers will be wanting a chat) character and/or landscape designs.

As it happens, I also have a friend who makes a living doing freelance graphic design work, with a natural style that's pretty similar to this. There is no doubt in my mind that, if given a brief of "a computer game set on an island full of cute monsters", he'd turn out something startlingly akin to this, never having even heard of either of these games.

Plagiarism is terrible, especially against small-time start-ups and self-employed folks, but sometimes a coincidence is just a coincidence, and not a very surprising one at that. Given that the actual games appear to share no similarity at all beyond their art styles, I think that Sounas' dissection is a bit much.

(*The most ridiculous part of the comparison being, "Even the tree shadows are the same!" They're darkened ellipses. I don't think that using an ellipse-shaped tint to represent the shadow of a more complex object is particularly unique.)

The artwork is similar and it could be true that the artists of Monsters Ate My Birthday Cake were inspired by Karios' work, but it seems as if SleepNinja is drawing their own compositions, creating their own overall designs, more than simply reusing Karios' art. Kind of hard to tell here because those islands and trees are quite exact replicas, so it could be a little of both.

There are many great artists inspired by the styles of other artists and I don't believe an overall style can be owned. Outright plagiarism is taking someone's specific composition, directly or in paraphrase, and using it as your own idea without crediting the author...which is very wrong. It's not too difficult to distinguish the difference between inspiration and outright copying; grey areas are harder.

The case with the Monsters designs is a little of both...maybe it falls into the area of "sampling." I'm not sure how many of my words I'd want someone to "sample"—it certainly depends on how they're used. If someone cut and paste whole chunks of this and just used it as their own? Wrong. But if someone happened to write "it's a bit like sampling", then even though it's my same idea, they're entitled to hold that idea in their head, too. I get very squeamish at the thought of walling-off ideas.

This is going to be one of those topics, though, that's always going to be a case-by-case thing...else we risk thought police type actions every time someone coincidentally comes up with similar ideas. There really are only so many ways to draw a winding river or skull mountain...I'm sure some kid was doing a similar design 100 years ago.