A truly epic Mobile Monday this week, as we've got some huge iPhone game releases along with the results of our drawing last week! The name "Myst" will perk anyone's eyes up, and recently that game's sequel, Riven, was released on the mobile platform. And it's excellent! Combine that with a new game from the creator of Hook Champ, a hilarious browser game hitting iOS, and one of the best freemium city building App Store release so far, and you've got more than enough reasons to stay curled in bed playing iPhone games all morning long.

And now, free game time! The creator of Clock Blocks was kind enough to supply us with a few free copies of the iPhone puzzle game last week, so we randomly chose a few commentors for the prize. Congrats to jolson42, glowtmickey, and Malorion for winning! We'll be in touch with you shortly to give you your prize, and be sure to check back soon for even more game giveaways! 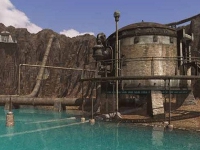 Riven - Needing no introduction and no praise from us for you to know it's an amazing game, Riven: The Sequel to Myst has been released for the iPhone. And, as you would expect, it's beyond stunning. The game received the same touch screen overhaul as its predecessor Myst, and every bit of the original game was stuffed into a single package, cramming five discs of data into a 1.01 GB download. It's a massive game, for sure, but oh so worth buying, whether you've played it before or are new to the experience. Over a dozen years after its initial release, Riven still manages to awe players with its rich world and tough puzzles, and the storytelling is as engrossing as ever.

Hook Worlds - Ready for more hook swinging action? From the creator of Hook Champ and Super QuickHook comes their best-looking and most playable game yet. Take control of four heroes, each with their own ability and own worlds to traverse. Everyone's got a hook, of course, and you use it to swing from ceilings to keep your momentum going so you stay safe from the baddie chasing you. But the secondary ability is what makes things interesting, allowing you to reverse gravity, rocket jump, or fire your gun, depending on the character. Each world has its own setting and storyline, and levels are randomly generated and endless, meaning you'll never run out of things to do. Unlockables and equippable items make the experience even more enticing, and Rocketcat Games is well-known for providing lots of tasty updates for its games! 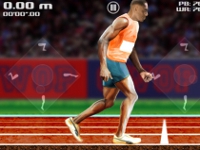 QWOP - Oh that's right, the hilariously uncontrollable runner is back, with all-new visuals and a brand new control scheme that's guaranteed to produce epic failures. Use the left and right diamonds to control the runner's left and right legs, sliding them around to manipulate the tiniest muscle movements. Most of the time, you'll end up flat on your face (or back, or chest, or bum), and if you do manage to get forward movement going, you'll probably look like a kangaroo doing an impression of a lemur on a pogo stick at a disco. But QWOP isn't about running. It's about giggling uncontrollably at your iPhone. 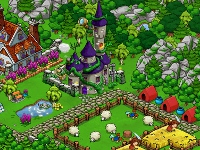 Trade Nations - A very well-tuned freemium building game along the lines of We Rule and Smurf's Village. This one, however, offers a greater degree of customizability and has a more simulation feel to it, along with a gorgeous art style. Build cottages to attract villagers, build places to harvest wood and grow food, then assign each villager a task. Harvest resources so you can make your village a sprawling town, then trade goods and services with your friends to grow even more. You can speed up tasks by purchasing magic beans, otherwise you'll wait for things to happen in real-time, as Trade Nations is active even while you aren't playing. There are tons of buildings and decorations to play with, and the friend sharing is a more integral part of the game than in other building titles on the iPhone.

Finally Riven is here! I started the series at riven 12 years ago when it was released, and I've played through every sequel, so when Myst came out for iPod touch I was glad I could finally play the first one. Now that riven is out I can't wait to play it again on iPod touch! I found the old game discs a few months ago and tried to play but it kept crashing so I gave up.

Sadly, I'm not sure if we can look forward to Myst 3: Exile or any of the other sequels anytime soon as they were developed and published by Ubisoft and Presto Studios, not Broderbund/Cyan. But who knows, maybe they'll be in the app store next year :D

Congrats to the winners of last weeks contest.

See Riven reminds me that I never did get around to finishing Revelation. Now I am going to dig out the discs and give it a go again.

Will you be reviewing android games in the future at all?

ahhh, thank you. I've only recently had an android phone and all the recent reviews seemed to be iOS. Thanks for the heads up :D

Next monday will be the 100th mobile monday!

Riven! If ever there were a series that captured my heart (and a lot of time) it would be Myst. I played all (but Uru) on borrowed CDs, so I don't own any. It would be nice to get Riven. Though, I know that once I beat it once (fortunately I don't remember it too well - unlike the original), I won't be able to play it again for a while.

In any case, I'm excited that Riven is finally here.

Good Lord... Riven on a phone? I remember having to look for my jaw when I first played that game back then - on PC, of course. Stunning visual display. And now it's all available on a phone...

Sometimes you feel technology just wooooosh past you...

Aww. Thanks for the freebie offer JohnB, but sadly I get "This code is only valid for customers of the [?] Store." I'm guessing that should be "US Store" but I'm in AU. Ah well, if I can't use it then please give it to one of the other three that entered.

Whoa, I won somthing! Thanks JIG. Clock Blocks is fun.

Once I find some money to spare, Riven is going to be great. I enjoyed QWOP on PC so I might get it for ipod too.