Ready to get lost in a dungeon? We've got a casual dungeon crawler that's packed with things to do, allowing you to delve deeper and deeper into the labyrinths as you continue questing for loot until the cows come home. Or until your bus ride ends. 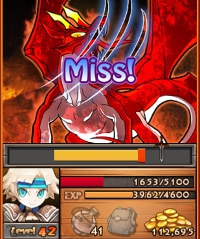 Deep Deep Dungeon - Dungeon crawling-style role playing games have found a mini-resurgence on mobile devices. Along with that re-emergence has come a decidedly more casual slant, with Deep Deep Dungeon being one of the most casual so far. The game strips exploration and role playing down to its basics, allowing you to move in four directions through increasingly difficult floors of a dungeon. Battle enemies, unlock treasure chests, manage your equipment, and return to camp to spend your cash on new weapons, armor, and other goods. The battle/chest unlock system is perhaps the game's biggest strength. At the bottom of the screen is a moving weapon/key that slides across a bar. Tap the screen to stop it while it's over the orange part to score a hit. Stop it over the red for a critical hit. Different weapons have different length bars and unique placements for the crit spots, creating quite a bit of strategy in choosing how to arm your hero. A very captivating game that's ripe with that "just one more level" addictiveness! 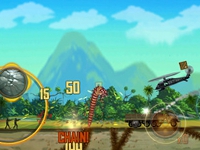 Death Worm - One of the indie gaming communities' secret favorite games, Deathworm, is back, and it couldn't have been treated any better. While the original game was just about controlling your giant worm as you swam beneath the sand and emerged to gobble humans, vehicles, animals, etc., this one features better visuals and a whole host of game types, upgrades, and abilities. Start with campaign mode to cut your massive worm teeth, nomming humans to progress through the levels. Then, check out survival to get a taste of power-ups and the game's nice upgrade system that lets you power your worm up to be even more destructive than before. An excellent update to an indie gaming classic! 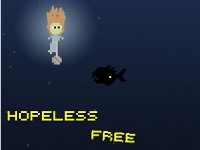 Today I Die Again - The artistic browser game by Daniel Benmergui, Today I Die, gets a wonderful iPhone upgrade. Floating in nothing, you control everything you can see on the screen, including the girl, the "enemies", friendly creatures, and words. By manipulating things on the screen you can create words that replace bits of sentences at the top of the screen. Change the sentence, change your setting, change the gameplay. The description pales in comparison to experiencing the real game, as it's a smooth and thought-provoking experience that's received a graphical facelift for its mobile debut. Easily one of the more unique games on the iTunes App Store. 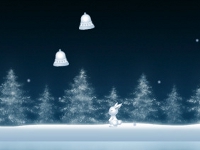 Winterbells - It's about time! Ferry Halim, mastermind behind the beautiful browser games at Orisinal.com, is bringing some of those experiences to the mobile platform! Winterbells should be familiar to anyone who's played a browser game in the last few years, and its simple gameplay is perfectly at home on the iPhone. The little snow bunny hops on his own, and as snowflakes float to the ground, slide your finger across the bottom of the screen to guide the rabbit to leap on the next snowflake. Hit birds for points bonuses, and if you fall, your game is over. Relaxing, beautiful, and simple!

This week really makes me want an iphone!

Not to sound whiny, but there are other Phone OS's out there. It gets depressing to see these great gems and but not have access to them.

For mobile gaming, at least now and for the foreseeable future, you picked the wrong phone, Android User, sorry to say (i have both and i don't use my android phone nearly as often nor for playing games), but there is a solution! Get an ipod touch and don't miss out on all the good stuff.

You're likely confusing total units sold for market share for the last quarter only, which was the first quarter and only quarter so far that Android surpassed iPhone in units sold. iPhone has had a very long head start, with many more total units sold.

Remember, the iPhone has been on sale since 2007, so there are a whole lot more iOS devices out there to play games on, especially when you factor in the iPod Touch.

And this is why all the best games are still being made primarily for iOS devices.

I have to agree with the other people about the best games not being on androids. It's not like I can even get an iPod Touch or anything even AFFILIATED with Apple, my dad would chuck it out the window! He flipped out when I installed iTunes, so I don't even want to know how he would react if I bought an Apple product.