There's sort of a general spacey, puzzley, anti-human thing going on in this edition of Mobile Monday. It certainly wasn't planned, of course, there just happened to be several games released at about the same time that included, you know, things that hate humans and let you play as them. Honest!

No, Human - While floating in space, the arrogant human said "We will colonize you, universe!". The universe was all "Nuh uh", and threw a flaming rock at the human's craft, smashing it to bits. In this physics game, you are the universe, throwing flaming rocks at human things, trying to smash everything into bits. There are things in the way, there are obstacles to ricochet off off. But oh, it's so much more glorious than that. Every physics trap you can dream of is in this game, including comets, magnetized rocks, ice rocks that need to be heated up, and more. In other words, yes, human, get this game immediately.

ChuChu Rocket! - In what may be the most bizarre puzzle set-up ever, Sonic Team's ChuChu Rocket is all about guiding chuchus (mice) to rockets located on the grid. The little guys walk in a straight line and change direction every time they hit a wall, and you can only affect them by dropping arrows onto the floor. Oh, and there are holes in the floor they can fall in, as well as big orange cats that'd love to eat them. Hundreds of levels to play, ranging from puzzle to arcade challenges to multiplayer battles. ChuChu Rocket hasn't seen much attention since its original release on Dreamcast, and it's great to see it's still alive and just as fun as ever. 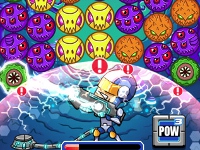 Linkoidz - Another great puzzle game, this one takes the familiar gem stacking concept to a realm of cheesy space sci-fi. Our hero has crashed on an alien planet, and the local inhabitants aren't too pleased about that. Orb-like aliens pile on top of your shield, and they have but one weakness: being grouped together in like-colored columns! Use your gun to pull Linkoidz through the shield and shove them in other stacks. Match three or more and they vanish, creating chain reactions, breaking ice blocks, and doing all sorts of other neat things. A sometimes frantic puzzle game that's just as much action as it is thinking (zen mode tilts it to the former a bit), but it's a great time killer for the mobile platform.

WackyLands Boss - Oh, those princes and knights and plumbers always getting the glory. What about the one who does all the real work? The villainy, the plotting, the planning, the general feeling of doominess? Yeah, nobody really cares about the boss (other than defeating him), but in this game, you're the boss, and you're sick of putting up with the non-boss-like humans. Stomp, punch, roll and battle your way through hordes of the fleshy things in this side-scrolling beat 'em up, upgrading your boss with a ton of equipment and body alterations. Lots of things to unlock, and the challenge level is there from the beginning.

I could have sworn in ChuChu Rocket! it was "big orange mice" and not "big orange cats". Oh, and the cats are KapuKapus. All you guys are idling on IRC.