Last week was an amazing week to own an iPhone or iPod Touch. 100 Rogues, a highly-anticipated game from Dinofarm Games, finally appeared on the iTunes App Store, prompting thousands of eager gamers to hit that "buy now" button. Not only that, but the massively addictive Sword & Poker received a sequel that does nothing but improve upon the original. We're supposed to be casual gamers and all, but it's ok to spend multiple hours on these games. Really. 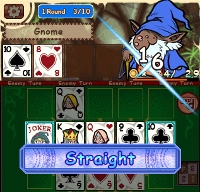 Sword & Poker 2 - The crazy good combination of puzzle, RPG and card game elements has returned, sporting new spells, new items, new enemies, and a new map system! The sequel to Sword & Poker retains the same grid-based battles found in the original. Take turns placing cards around a set of cards as you try to make valid poker hands (straights, pairs, flushes, etc.). The stronger the hand, the more damage you deal. Earn coins by defeating enemies and buy better weapons/equipment in the shop. It's a simple idea that's executed so smoothly that you won't be able to stop playing.

100 Rogues - The roguelike is far from dead, as this stunning new iPhone release happily illustrates. Crawl through monster-infested dungeons as you hunt for loot and explore floor after floor of danger and intrigue. Tons of items and equipment can be found, which is kind of the point of a dungeon crawler, and your character slowly gains experience and new skills as you play. Don't die, though, because if you do, you're gone for good. 100 Rogues is a tightly-crafted game that draws you back time after time with its casual-friendly gameplay. 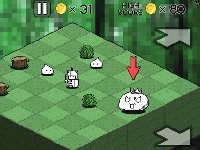 RPG Snake - The Adventure of Akua - Now here's a grand idea. Remember the old game of Snake, the one where you eat food and grow longer by the bite? Instead of a snake, you have a hero. Instead of eating food, you vanquish enemies. And instead of growing longer, you clone yourself. Sounds kinda quirky, doesn't it? And you would be right! But somehow RPG Snake delivers exactly what the title promises with a whole lot more. The playful visuals make it all the more enjoyable!

If you have an iPhone and don't pick up 100 Rogues, we're not friends anymore. There's a ton of extra content coming down the pipe for this one (new floors, new playable characters, merchants, etc), and what's there already is a lot of fun. Probably the best roguelike I've played in a long time.

Still no non-iPhone version of Sword and Poker? >_>

Haven't tried 100 Rogues yet but I've been hooked on Sword of Fargoal. Apparently it's a remake of a C64 classic but I never played it. If you love the idea of roguelikes but find them a bit too punishing and/or complex try Fargoal.

There's a Squire mode where you respawn at the last visited temple instead of dying and Legend mode that's somewhat tougher but more rewarding than the standard Hero mode. It's not as complex as most roguelikes so it's a great intro to the genre too.

It gets updates from time to time and there's a forum to discuss your adventures and get help. (No I'm not associated with the game, just a fan :)