Greetings! Your iTunes App Store-based lesson this week: "simple" doesn't necessarily mean "not fun". All of the games featured this week are rather simple, but thanks to some snazzy design choices, they're extraordinarily fun. And remember: each week on Mobile Monday we offer you the chance to win an iTunes gift certificate that will cover the cost of every game featured in the article. All you have to do is sign-in with a Casual Gameplay account, leave a comment giving feedback about one of the games, then check back the week after to see if you've won. Simple! Congratulations to last week's winner, Fred! 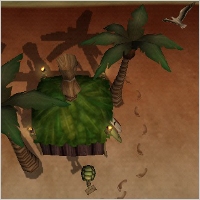 Distant Shore - A wonderfully captivating game that's as simple as walking on the beach, picking up seashells, and sending messages in bottles. Tap the screen to move across the sand. Find five shells to get a bottle, access it in your inventory, then type a message and toss it out to sea. Bottles are randomly delivered to other Distant Shore players, you can even reply to messages you receive! There's just something intriguing about talking to random, anonymous people...

Dactyl - Doesn't get much simpler than this. A grid of bombs fill the center of the screen. When it flashes and the fuse starts burning, touch it as quickly as you can to extinguish the flame. Tap as many as you can and go for a high score. Let a bomb explode and it's game over. Makes great use of the multi-touch feature, you'll feel both hemispheres of your brain integrating like there's no tomorrow.

newtonica2 - A great physics-based puzzle game with tons of challenge. Your goal is to guide the little birdie to the goal of each stage. Touch a black sphere to send out a "cosmic wave" which, if close enough, will push the baby bird across the screen. Mind the bumpers and try to collect all of the donuts in the game's 36 stages. A free lite version is also available, as well as newtonica2 resort, featuring more newtonica2 puzzles. 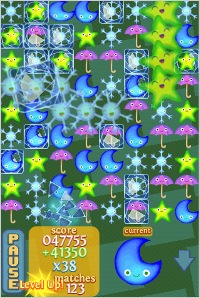 Smiles - Easily one of the best puzzle games on the iTunes App Store so far, Smiles takes the matching concept to a new, cuter level. All without the nasty time-based pressure many modern games impress upon us poor casual folk. Depending on which mode you're in (Zen or Drop), your goal will be different, but the basic idea remains the same: touch a piece to swap it with the current piece displayed at the bottom, making matches on the screen above. Three main modes of play are available, and you can grab them as individual apps or as one big (cheaper) package: Smiles Zen, Smiles Drop, Smiles, and Free Smiles.

American Dominoes - There are presently only 3 implementations of Dominoes in the iTunes App Store, and they're all created by Soneso (Rogobete Christian). American Dominoes is our favorite and gets the job done admirably. Featuring 3 popular variations including: Five-Up, Block and Draw, the game also provides 3 difficulty settings when playing against the computer. Two-player, over Wifi or using the same iPhone/iPod Touch, is supported as well. Lots of tile sets and backgrounds, as well as scoring and rules settings round out the customization features in this excellent implementation. Downsides: the arrows that you press when there are more than one possible location to place your domino can be confusing, and scrolling of the play area becomes necessary late in the rounds.

Distant Shore offers a new and exciting, calming experience. I just don't find myself coming back to it very often. I'll open the program every once in a while, but it's replayablity seems limited to me.

I've tried the demo of newtonica, I might try out the full version soon, as I enjoyed the lite version.

"Mobile Monday" is kind of slanted...is it not? I love this site, but one should keep in mind that not everybody owns an iPhone. If you're going to do a mobile based theme, maybe you should consider adding apps for Blackberry, etc. Or, at the very least, add apps that are Java based so everyone can enjoy the theme.

I really think there should be a 'best of free iphone/ipod games' mobile monday, for those of us who can't afford to be spending 2 and 3 dollars here and there just for a little entertainment (granted, my parents bought me my iphone...)

I've played Dactyl. I downloaded it, played it, got bored, and deleted it all in about 5 minutes. Can't complain too much though. It was free.

The only game of this set that I've tried is Dactyl. My brother has had it for a while on his iphone, and everytime we get together, I try to top his score. Unfortunately, another of his friends now has the top score - a ridiculous 1000+. Perhaps I'll have to get it myself and see if I can top that.

The bottle feature of Distent Shores is interesting

I got Distant Shore a week ago, and I LOVE it. Anybody who's hesitating, go get it!

Dactyl: amazing and highly addictive game! This game is awesome (and free, at that). Smiles comes in second, as a swap game I actually like.

If you look at the comments in previous Mobile Mondays, Jay said that he believes that while there are apps for other mobile devices, the quality tends to be much better in the itunes store. Plus, the ipod touch/iphone is the mobile platform that a large number of people are most likely to have.

I'm also a bit addicted to dactyl. I'm sure I'll get tired of it soon, but it was free and has kept me entertained for a few minutes, so I'm happy!

Distant Shore is so cool! The idea is great, although I admit it could be implemented a little better (but that's what updates are for!)!