Hugely, hugely, hugely addictive games on this edition of Mobile Monday, apps we just couldn't keep our smudging little fingers off of for very long. Each should be familiar to anyone who follows the casual/indie gaming scene, but their transition to the mobile platform introduces new controls as well as our favorite hook: complete portability! 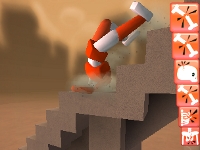 Stair Dismount - Developed by Secret Exit, the studio behind Zen Bound and SPiN, Stair Dismount is exactly what the title promises. Your goal is to nudge a ragdoll character down the stairs, causing as much virtual damage as you can. Choose which part of the doll to push, select the force you want to use, and watch the professional stair dismounter do his thing. It's a lot of fun to tweak your tosses for maximum points, and there are a good handful of stair designs to test your luck on. You can also grab the original free downloadable version for Mac, Windows and Linux.

VectorTD - Ever heard of a little tower defense game called Vector TD? Of course you have, you crafty casual gamer you. David Scott's stylish strategy game has been packed into the iPhone for on-the-go creep destruction. Wave after wave of vectoids come pouring through the gates, slowly making their way around the maze and to the exit. It's your job to place towers along the path to take the baddies out as efficiently as possible. Spend your cash to plop a dozen types of buildings, each with its own strength and style of attack. Check out our review of the original browser version of Vector TD along with Vector TD 2 for loads more information. Apart from rather tiny on-screen buttons, this one plays like a charm on the touch screen. 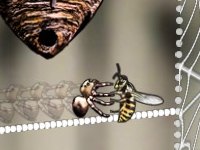 Spider: Hornet Smash - Created to promote Spider: The Secret of Bryce Manor (a wholly original and engaging game, if you have yet to try it), Hornet Smash uses the same spider physics (did I really just write that?) as Bryce Manor, only instead of sending you on an exploratory adventure, now you're hunting down hornets. Leap across pint-sized stages to tackle the stinging bullies as you compete for points on an online leaderboard. Spinning a complex web isn't quite as useful in this arcade game as it is in Bryce Manor, but you'll have a good time streaming across levels and taking down bugs all the same.

I got an iphone yesterday so I can finally get these games that have been taunting me with their awesomeness.

I'm hoping Android games are added into the mix soon :)

monkeymynd: They won't be. I have an Android phone and have looked through the offerings on the marketplace. There's nothing worth featuring. :-)

I also wish JIG would review Android games, especially now that the Nexus One is out and it's a more powerful platform for games.

There are plenty of casual games for Android that are worth reviewing, such as "What the Doodle".

Please reconsider and post some of the better ones :/