An impressive list of games to start of your iTunes gaming week, and each one does something special in the artwork category, giving you some gorgeous eye candy to stare at while you play. And don't forget: each week on Mobile Monday we offer you the chance to win an iTunes gift certificate that will cover the cost of every game featured in the article. All you have to do is sign-in with a Casual Gameplay account, leave a comment giving feedback about one of the games, then check back the week after to see if you've won. Simple! Congratulations to last week's winner, Donut! 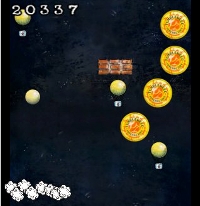 Skybound - A surprisingly addictive physics-based arcade game created by Tumbleweed Interactive. Bounce the ball upwards by drawing clouds on the touch screen. Hit a brick and the ball becomes heavy for a few seconds, but land on a floating balloon to get a massive boost upwards. Three modes of play are available: Easy, Normal, and Boss, which pits you against a tres cool floating eye monster. A number of interesting achievements keep you coming back for more, and I just can't get enough of the awesome artwork. A free lite version is also available.

Trace - Similar to the web-based Draw Play (though much less frantic), Trace combines drawing and traditional platforming to form a creative blending of genres. Using the arrows and jump icon at the bottom of the screen, move the little character through the stage, swiping your finger on the touch screen to create platforms where needed. A great variety of stages, simple artwork, a simple idea, simple execution, but a very fun result.

SPiN - Super Shape Puzzle - A silhouette looms in the center of the screen, then a 3D object appears in front of it. Rotate, flip and twist the object to make it match the silhouette. Multiple game modes give you plenty of variety, and a free lite version lets you try things out before buying. The idea is simple, but the execution is nothing short of perfect. And check out the amazing art style! The studio behind SPiN, Secret Exit, is also working on a few other games, so definitely keep an eye on these folks!

Ruben & Lullaby - An uncommonly artistic game on the iTunes App Store, Ruben & Lullaby plays out like a visual novel, only without the text! Ruben and Lullaby are a young couple having their first fight. The future of their relationship is quite literally in your hands. Rub the screen to calm each character down, shake the iPod Touch/iPhone to make them angry. You can even direct where their eyes look, all of which has an affect on the other character's emotions, facial expressions, and the argument as a whole. It's a stunning use of emotion in a game, and the dynamic soundtrack and multiple endings are worth experiencing several times over.

Bobby Carrot Forever - A beautifully illustrated top-down adventure/puzzle game reminiscent of classic gaming's best offerings. Move Bobby Carrot around by touching the edges of the screen. Collect carrots, hit switches, find and use a number of creative items (watering cans, lawn mowers, etc.) to carve your way to the exit in each stage. Surprisingly imaginitive design. Around 60 levels will offer hours upon hours of gameplay, so you won't run out of things to do for a very long time. Fans of Adventures of Lolo and the Wonderland series will definitely want to check this one out. A free lite version is also available.

I downloaded Trace a while ago. (For free I believe) The controls aren't the best, but for a touch screen they work. It's a fun game. It's worth a download. Especially since it's free.

So do you have to itunes to play all of these games. Because I dont have the money to join.
Cynthia

I enjoyed Trace, and I enjoyed Bobby Carrot on an old phone, so I might pick that one up.

Bobby Carrot looks interesting. If only I had an iTunes gift card...

hey jay please tell me why you didnt post any
games on the 8 i kept coming back looking for
new ones were did you have to work late or
something?-wondering why meme

[Edit: Sorry meme, we couldn't find any downloads that were good for recommending this weekend. :( Maybe we'll have better luck next weekend. -Jay]

Trace is a lot of fun and free. Some of the levels get quite challenging, although some of that is the control mechanism for movement on a touch screen. I'd love to try Bobby Carrot, but it's over 10 MB, so I can't download until I'm at my home PC or somewhere with wi-fi. At $8, I may not be ready to pull the trigger.

Downloaded and completed trace a while ago. The music is so relaxing.

Spin is a nice-looking game but it's very difficult to spin objects unless your fingernails are very short!

Hahaha, yes, I can imagine doing *anything* on a touch screen with long fingernails would be a challenge. xD

As for this group of games, stellar! I didn't contribute to this batch, so I downloaded them all on John's recommendation last night, and I have not been disappointed with any of them so far.

Bobby Carrot looks interesting but I don't have an iPhone. Apparently all five games in the series are available for other mobile phones, but the web-site is pretty crappy. Anybody know where to look?

That novel looks interesting. Is it free?

Skybound is indeed a good, and semi-addictive game. Trace and crayon-based things are not quite my style.

Ruben And Lullaby is great. I really love the music. Now I just gotta see if i can get them to stay together. >.>

SPiN is kinda interesting. Makes good use of the multi-touch capabilities of the iPhone. I didn't realize that most of the time you could rotate the object only once or twice to get it to match the silhouette, but once I realized that, the game became very strategy oriented. Thumbs Up!

Trace is great, but the controls can be iffy. It's so hard to draw a precise line with your finger. Sometimes, I wish this device had a stylus.

there aren't enough puzzle games for iphone, IMHO. and not enough for free!!

you don't have to buy itunes
when it tells you to give your credit card info etc, you can just skip it (i think there was a little box that says "ask when buying" or something like that). Then you can download the free apps (and others if you wanna pay)