So many games, so few breaks during the day to find an excuse to play them! The iTunes App Store is heating up with some of the best game offerings its ever had. First I Dig It stole my heart, now Space Invaders and Dungeon Scroll threaten to do the same!

Space Invaders: Infinity Gene - The great-grand daddy of all shooters has evolved and come to the iPhone. Space Invaders: Infinity Gene is the original game taken to the next level. And then given a nitro boost. Starting from the classic shooter and slowly adding abilities, weapons, and options, the game truly evolves as you play. Movement is handled by tapping and sliding anywhere on the touch screen, allowing you to move your ship without obscuring it with your finger. The levels play out like a tripped out version of Galaga, and the action is fast and furious. This is Space Invaders for today's generation. 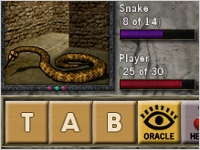 Dungeon Scroll Gold Edition - One of independent gaming's favorite word games makes its way from a downloadable Windows game to the iTunes App Store. And perfectly intact, I might add. Venture deep into a dungeon encountering monster after monster, each one chipping away at your hit points as time ticks by. Instead of pulling out swords and maces, however, you spell words using a group of letters that only changes after several battles. The bigger the word, the more damage you do. Dungeon Scroll encourages a curious strategy where you hold back on impressive words until you have a tough enemy to defeat. Save the three letter words for the bats and rats! 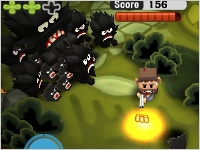 Minigore - Like the name implies, this "dual stick" isometric shooter is packed with gore—wait, no it isn't! It's all cute and cartooney and stuff with blocky-headed characters and colorful bushes! The game plays much like iDracula where your left thumb moves your character while your right controls which direction you shoot. Mow down the progressively stronger packs of enemies and stay alive as long as you can. 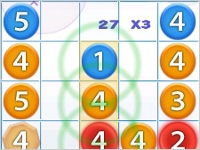 DropSum - The downloadable game turned Flash game has now turned into an iPhone game. DropSum is a puzzle title that, at first, might remind you of Tetris or Drop7. Slide numbered orbs from above into the grid below. Any time a vertical or horizontal group adds up to nine you score points and those orbs change color. Shift them from blue to yellow and red by making more groups of nine and they'll finally explode, allowing more orbs to take their place. The chain reaction possibilities are enormous! A free DropSum Lite is also available.

I very excitedly bought Space Invaders: Infinity Gene as soon as I heard about it, and... eh. It's attractive and eerie. But it's way too easy on 'normal' difficulty and too hard on 'hard' (which isn't available until you beat it on normal anyway), plus the 'evolution' mechanic is nothing more than a standard system of unlocks with a cute (but meaningless) graphical element added.