Don't you love it when an "old" game gets a surprise update? Kinda makes you glad you left it sitting on your mobile device all this time. It wasn't because you couldn't beat that one level with the conveyor belt, no sir. It was because you were waiting. Waiting for the magical update. From the future. 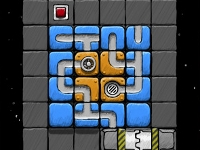 Aqueduct gets a tidy update - It was 2010 when Kieffer Bros stylish sliding block puzzle game hit iOS devices. Many successful updates and a lot of scratched heads later, the team has rolled out another set of 30 free puzzles, new colorful backgrounds, and support for 4" Retina screens. If you never gave Aqueduct a try, it offers some seriously challenging levels that require planning, strategy, trial and error, and a touch of luck. It's also one of our favorite mobile puzzle games, even three years after its release!

Rayman rumor - A tiny little rumor has been floating around that Ubisoft is about to announce a new Rayman running game. A direct sequel to Rayman Jungle Run, what could be titled Rayman Fiesta Run was apparently leaked via an image pulled from Ubisoft's website showing the logo. Vicious speculation or kernel of truth? We don't have long to wait to find out, the announcement is rumored to hit this week!

SwapQuest exchanges pipes for swords - Another puzzle/RPG hybrid is on its way to mobile devices, but this one's not quite what you think it is. SwapQuest from Rebusmind puts you in a field of tiles and challenges you to swap paths around in order to progress forward. Characters battle monsters and pick up treasure as they encounter them, giving it a sort of Pipe Dream feeling. The layer of 8-bit fantasy artwork, branching paths, hidden loot and dozens of items and enemies makes it all the more appealing! Look for SwapQuest later this year on iOS.

SwapQuest looks promising, too bad the developer seems to be stuck on Facebook and iOS, two mediums that seemingly are in contention with the potential demographic of the game.
Hopefully we'll see it in Flash or Android format eventually.