What's a gamer to do when there's more than one game to play? Head to a reputable forum and start a debate, that's what! Let your inner fanboy/girl out and blindly support whatever faction you like for whatever reason. It's the internet, after all.

Be a pirate for cheap! - The Trese Brothers' delightfully complex retro strategy RPG Age of Pirates RPG is on sale for a few days. Sail your ship on the great seas of Laanbrakar during the age of sail, raiding, plundering and trading in search of riches, fame or infamy. Your fate is in your own hands, will you turn your broadsides against the enemy in the wars of the nations, pirate and maurade for your own gain, or haul great loads of cargo across the dangerous seas to turn a profit as a merchant. The team behind Star Traders rarely does discounts, go get to pirating while the pirating is good! (Android)

The great debate: Terraria vs. Junk Jack X - Two amazing sandbox games hit iOS this past week. Terraria is a mobile port of the full-blown PC game, while Junk Jack X is a sequel to the 2011 mobile release. The biggest question on everyone's mind: who would in in a fight, Superman or Goku? Just next to that, though, is which mobile sandbox game edges out the other. We don't want to influence you too much, but you can check out our Terraria (mobile) review and Junk Jack X review and decide for yourself. Or you can just buy Terraria on PC and Junk Jack X for mobile. 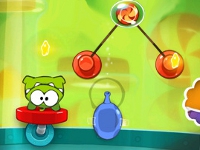 Free App of the Week: Cut the Rope - Each week on the iTunes App Store, Apple drops a single release down to the tasty price of "free". This week, that freebie is Cut the Rope, ZeptoLab's original rope slicing candy feeding arcade game. Way before there was Time Travel or Experiments, it was just you and Nom waiting for some candy. Grab it now while it's free for the first time in forever!