Shortly after this edition of Mobile Monday materializes on the internet, NASA's Curiosity rover will crash through the thin atmosphere on Mars on its way to an extraordinary landing. Even if you're not a space buff, you should check out the crazy things this little rover has to do in order to land securely. Go ahead, read up. These mobile game news bites aren't going anywhere!

The Last Rocket rides on - Shaun Inman's got a nice surprise in the works. If you enjoyed the pixel-perfect puzzle game The Last Rocket, you'll probably recognize the set-up for this new, more arcade-like release titled Flip's Escape: The Last Rocket Side Story. Picking up where The Last Rocket left off, it's time to dash through space as you make your escape. Pick up items, upgrade yourself, and keep flying forward as you do your very best to stay away from the sun. The mad dash is coming to iOS devices "soon", so in the meantime, read up on Flip's previous adventure and see if you can see that game's story to its completion! 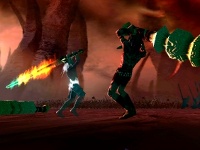 God of Blades makes reading more awesome - Ladies and gentlemen. White Whale Games presents God of Blades, a frighteningly gorgeous physics-based sword fighting adventure that represents some of the best elements of pulp sci-fi and fantasy. The combat is detailed but fluid, featuring tons of weapons and plenty of intricate moves you can pull off to defeat your foes. But it's more than just a game. God of Blades was conceived as a re-interpretation of a series of lost paperback novels released between the 40s and 70s. The rich fantasy universe has since been erased from our collective memory, so you have to go on your own quest to absorb more stories in real life. Even cooler, you can unlock special swords for visiting real world libraries! Watch for God of Blades, along with a trilogy of original pulp fantasy novels, later this year.

Wizorb goes mobile - In case you were too hip and mobile-oriented to catch the game's original PC release, Wizorb has now bounced its way to iOS devices, bringing with it all the colorful 8-bit Breakout-meets-RPG action you can handle. The mobile port works so very well with the touch screen, and even the less arcadey parts play well. Check out our Wizorb review for more info on the game, or just head over to the app store and grab the mobile version straight away. No matter your choice, there's a lot of bricks that need to be broken... 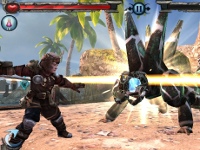 Horn Zelda-ifies Infinity Blade - Due to light up our mobile devices later this month, Horn from Phosphor Games can be neatly described as Infinity Blade 2 plus a little Legend of Zelda. Using the Unreal Engine, you get to move around in a full 3D world, attacking huge monsters with detailed and in-your-face combat. When you're not duking it out, though, you get to experience the game's narrative, inspired by the Old English tales of King Horn, as well as search the countryside for neat things to use. It sounds pretty impressive if you ask us, and we can't wait to get our hands on it in just a few weeks!