So, how's your summer going? If it's not summer where you live, we're coming over for a few weeks. Whatever it takes to get away from this heat. As a rule, any environmental temperature higher than that of our internal body temperature is a bad idea. So far, we've been hanging out playing mobile games with a fan blowing in our faces. So, seriously, we're coming over.

RocketCat on a quest to punch - Did Mage Gauntlet capture your heart? Could you not get enough of Hook Champ or Super QuickHook? Neither could we, which is why we're jazzed to hear RocketCat is working on a brand new game, this time a retro-styled sidescrolling brawler called Punch Quest! As a barbarian pummeling hordes of enemies, you get to tap your way to victory using very simple touch screen controls. Not only that, but you can ride a dinosaur that shoots lasers out of its mouth. We swear that's the truth, so keep an eye out for some epic pixel-fueled adrenaline.

Simogo gives us a riddle - Simogo has done nothing but tickle us giddy with its mobile releases so far, starting off with Kosmo Spin, moving to Bumpy Road, and most recently dropping in Beat Sneak Bandit. Now, its next game is in production, and the team has begun releasing a few teasers to set our brains a-conjurin' in the form of an ARG of sorts. Here's what we know: the game uses a new control method, it isn't level based nor is it endless, and they are "getting help within the anthropological field" to make it. Intrigued? Us too. Which is exactly why you should check out their site for a few other hints and suggestions on where to find more information! 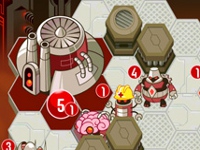 Outwitters to outwit soon - From the creator of Tilt to Live, Outwitters is a colorful turn-based multiplayer strategy game coming in just a few days to iOS devices. Each team of pirate fish (the default units) has five unique characters that can be spawned and sent out to occupy the other player's base. Additional unlockable teams include a robot army and the ultra-cute Adorables, which makes us think the game could involve a lot of cross-species hugging. That, or it's a bit like UniWar meets Starcraft, which is absolutely fine with us!