Ports galore! Mobile markets are a great breeding ground for new and interesting game ideas. They're also ripe for ports and remakes, since almost everybody loves taking their favorite games with them wherever they roam. 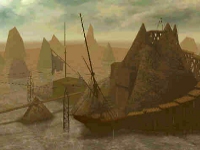 realMyst for iOS - Myst for iPhone has already happened, as well as Riven for iPhone. With iPad support for both games still in some sort of strange lymbo, CyanWorlds has released a teaser video for realMyst, the fully-3D remake of the original Myst game (read: no still screens, you can actually walk around). realMyst has been around for a while, but the mobile port should spark some renewed interest in the classic series. The release date is still listed as "spring 2012", so, you know, that could be any time now!

Trainyard does Android - Fans of the phenomenal iOS logic puzzle game Trainyard by Matt Rix have had a monopoly for long enough! Just a few days ago, Trainyard was released for Android, sporting 100 levels and half as many extra-difficult bonus puzzles. The game features a draw-your-own-solution puzzle mix where you guide trains from spawn points to stations, mixing colors and switching directions as they pass. It's a brilliantly-designed game from top to bottom, sporting a hefty level of challenge and a robust community of users who are just as stumped over certain puzzles as you are!

Linux Tycoon mobile bound - Fans of Linux are everywhere, as are fans of tycoon sims. Combine the two and you get Linux Tycoon, the "premier Linux Distro Building Simulator game". If you've ever wanted to design and release your own version of Linux, maintain it, streamline it, and get the world to download it, but were too afraid to, you know, actually do it, this is the game for you. It's already out for Windows, Mac and Linux, but Android and iOS versions are also in the works, which is a pretty geeky and exciting thing to look forward to!

I installed Trainyard on my Kindle Fire, beat some levels, then the next day when I go to play it, I get a black screen, then it goes to the home screen, Trainyard's Icon on the carousel, as if I had been playing it.

Nevermind, the Trainyard website gives information useful for me.