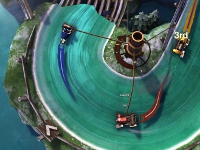 Grappling with the concept - Cars with grappling hooks? What sort of madness is this?! The good kind, fair player, the good kind. Crescent Moon Games and Snowbolt Interactive recently teased the upcoming iOS racing game Slingshot Racing that plays a little differently than you might expect. Instead of directly controlling cars on a track, each vehicle has a grappling hook you'll use to slingshot yourself around the raceway. Awesome, right? It's a bit like the early iOS darling Asterope in concept, though the visuals are something different and the level layouts will be much more "earthly". 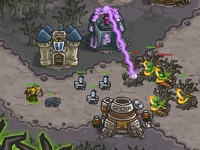 Kingdom Rush expands its kingdom - As if walking away with Game of the Year in our recent Best of 2011 feature wasn't cool enough, Kingdom Rush and Kingdom Rush HD developer Ironhide Games has detailed a few updates to the iOS version of the tower defense game that should be live any day now. The list includes retina enhanced visuals for owners of the new iPad to enjoy, a new stage, the Rotten Forest, and six new hero units with special abilities that could greatly alter your strategies. It's time to jump back in and remember why this game stole your afternoons away for weeks at a time!

Deepworld, a steampunk Minecraft - What if you took Minecraft (or, really, Terraria) and set it in a steampunk world? Developer Bytebin Studios had that exact thought, so the team created Deepworld, a 2D MMO with all the crafting and harvesting you could shake a pick axe at. The game is still in alpha but plans to add a dynamic ecosystem, steam-powered vehicles and machines, social game modes, and cross-platform play between iOS and Mac. Very ambitious, and very intriguing! In the meantime, try out Junk Jack for a great 2D Minecraft-alike for iOS devices. 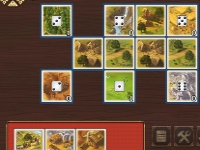 Catan you dig it? - Just teased by USF Software, Rivals for Catan takes the Catan card game (which is a remixed version of Settlers of Catan) that features the same sort of territory building gameplay you would expect, only in a more simple format. Not a lot of information has been released yet, but the game will be universal and support both local and online multiplayer. And it will probably own your life when it's finally released!