Word games everywhere! Word games galore! Except, there's just one word game, but it's really fun, so let's pretend! There's also crazy RPG running game and a game with cherries and a guy with really long legs. And if you thought "hey, I know what long legs are!", you're probably wrong, because this guy's legs are really long.

Mr. Legs - Would you just look at those magnificent legs! They're stunning! So are those cherries floating around the screen! Tap and slide to make Mr. Legs grow taller or shorter, depending on where he needs to be to avoid enemies or nom some fruits. The longer his legs, the faster he walks, but the faster he walks, the more difficult it will be to disarm traps and stay away from the bad guys flying around. A simple but phenomenally fun game that will trap you with its visual style right from the start! 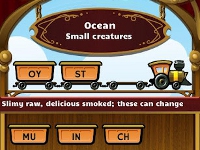 Word Train - Tailor-made for a casual crowd with a great visual package and perfectly tuned difficulty, Word Train combines quiz-like elements with a little word creation, similar to 7 Little Words (iOS/Android). The train stops at a series of stations, each with a particular theme (cars, countries, foods, etc.). While there, you are given a handful of clues and a pocketful of train carts, each with two letters on its side. Using the clues, or your own awesome spelling skills, tap letter pairs to form words and send the train off on its merry way. A smartly-designed game with new puzzles every day. Hard to say no to that! 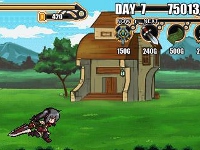 Trigger Knight - The browser version of this one button running/survival/RPG game from MINTSPHERE was mentioned back in December, but now with a strong mobile port, you can take the same dash-n-slash action everywhere you go! The basic premise is this: you are a knight running across a field. Every so often you encounter an enemy and automatically do battle. You also pass armor, weapon, and healing shops that can upgrade your gear or refill your hit points. You don't participate in the battles, you just decide where to spend the gold, creating a fabulous one-way adventure that only ends when you run out of health. Also available for iPhone and Kindle Fire.

NOTE: Games listed may not be available outside of North America. Prices are subject to change and are therefore unlisted. Please see the individual game pages for purchasing info. Games have been confirmed to run on an Android 2.2 device as well as any applicable tablet devices.

Word Train is not guaranteed to work on older phones, as proven evident on my Huawei Comet. I've reported it twice and despite the updates, it still dropkicks me out from just the loading screen. It may have had something to do with residing on my SD card, but even after pushing it onto my phone's memory, the effects remained.