As you can probably tell, we had a bit of an elemental kick for this week's edition of Mobile Monday. Hey, sometimes you get an idea in your head, and you just run with it! Fortunately, Google Play Android Games is filled with creative (if unpolished) games that try to bend the rules a bit. And we've got a few of those below!

Elemental - A mix of sudoku and Doodle God, and it works even better than you might imagine! Each grid is filled with basic ingredient squares that combine to form more complex elements. By dragging the four elements from the bottom of the screen, you can slowly fill the grid to create the materials you need to complete the stage. The trick is each row and column can only contain one of each basic element, forcing you to do some logical thinking before you can start dragging things around. There are tips you can use, of course, but if you're hard core determined to get a good score, you'd better leave those behind and start thinking a little harder. A free version of Elemental is also available. 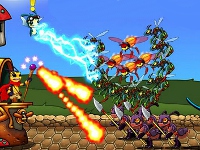 Bumbledore - From the same team behind the multiplayer arcade combat game Altitude, Bumbledore is a nice and casual defense game filled with action, magic, and bees. Beezlebug is sending hordes of evil insects after your hive, and it's your job to keep it safe. Touch and drag to aim your magical powers, timing your moves so they eliminate as many enemies as possible with each attack. As you progress, you get more spells and encounter crazier enemies, but your pal Zappy is always there to help you out! Loads of fun, and the bright visuals keep this one high on your most played list.

Cause and Effect - If you'll excuse this game's rather dated visual appearance, a surprisingly mind-bending puzzle game awaits you! Using elements represented by small squares, your job is to drop them on the weighted grid with the intention of settling a target element on the marked square. So, for example, you might need to set a fire element in the bottom corner of the grid. To make that happen, you'll need to use elemental effects to your advantage, melting things, burning things, creating things, and stacking things as you see fit. A very logical game in nature, but challenging, and it's quite different than most puzzle games on the market today.

Actually, that's not a bad point. Next Android Mobile Monday, I'll make sure to get some Fire-compatible games on the list!

Where did the QR codes go?! I got a htc today, and i've been reading all these! Bring them back!