Ready for some more game-related Android loving? We're digging up some of the less-lauded titles for the overlooked marketplace, ensuring you get that hearty, delicious gameplay flavor while preserving your right to feel superior when these games catch on and everybody likes them even though you played them months beforehand!

MatchHack - Dungeon hacking RPG, meet a casual game of memory. This quietly awesome game plays like a progressive game of memory where you turn over tiles in the dungeon surrounding you and your foe. Flip one over, note the item there, flip another and hope it matches. If it does, you damage the enemy. If it doesn't, they turn back over and you take some damage. See how simple that is? The more you win the deeper in the dungeon you go, and items like potions help you survive while treasures you hang on to gives you impetus to keep playing level after level. 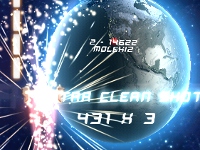 Stardunk - Talk about "just one more round"! This excellent space-based physics game from Godzilab, creator of iBlast Moki 2, will fool you with its simple premise. But once you sink half an hour into it, then shoot for another half an hour, you'll be all "ok fine it's really really awesome". Tap and drag across the screen to choose the ball's trajectory, then tap again to send it flying. Aim for the basket and you score. Miss and your position is reset for another shot. The coolest part is the game is massively multiplayer in nature, pitting you against all the other players of Stardunk at the same time. How's that for a game of b-ball?! Also available for iOS devices as Stardunk and Stardunk Gold.

A Game with Balls - True to its name, this little survivor-based arcade game sits you in a tiny cannon at the bottom of the screen and sends a whole horde of balls raining from the sky. Big ones, little ones, space-themed ones... you name it, if it's orb-shaped, it's coming at you. Fortunately you've got a gun that can shoot pellets to knock the evil balls away. Keep your cannon safe while you fight off geometric shapes as efficiently as you can. Loads of level themes and surprisingly varied gameplay for a title with such a simple premise. Also available for iOS.

Rocketron - Simple, challenging, and cuter than a kitty eating a lollipop, Rocketron is the prime example of a good mobile game. The easy pick-up-and-play arcade game puts you in control of the smiling little planet as it launches across the galaxy in the distant future year of 1999! Tap the screen to switch sides, moving from top to bottom or vice versa, to avoid obstacles or stay on the track. That's pretty much it! Easy to get into, but frighteningly captivating. A free Rocketron Demo is also available.

A Game with Balls looks to be a clone of the old flash game "Red." If you don't wanna spring for the mobile app, check it out: https://jayisgames.com/archives/2006/10/red.php

"A game with balls" reminds me of "Red" by IvoryBoy.