Are you ready to be impressed? Some seriously good looking games have recently been released for Android phones, pushing the limits of what the mobile devices can accomplish, and threatening to scrape the upper limits of your data plan cap. If you can afford the price of entry, however, you can enjoy a near-console-quality game in the palms of your hands, making your phone so much more than a way to talk to grandma every Sunday.

Note: Google recently launched a web version of the Google Play Android Games, allowing you to download and install games to your phone right from your browser. We also recommend AppBrain for a more full-featured web-to-phone experience. 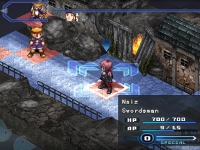 Spectral Souls - Wow. Wow wow wow wow. This game should not exist on your mobile phone. Really, it belongs on a dedicated portable gaming device (or Android-based tablet!), judging from its depth, visual style, and impressive list of features. Spectral Souls is a full-fledged tactical RPG with hundreds of hours of gameplay, cut scenes, dozens of characters, and a whole lot more. The story takes place in Neverland, a world filled with humans and demons struggling against each other for countless decades. But when the battles reach the small town of Petun, something interesting occurs, kicking off the Seven Year War that would change Neverland forever. Two warnings before you grab this one. First, it's expensive, weighing in at around 15 USD. Second, after downloading the game, you have to download an additional 1GB of data, so make sure you're near a stable wi-fi source before starting that up. Apart from the steep price of entry, this release is pure gaming gold. 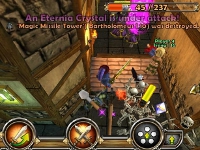 Dungeon Defenders - Another impressively-built game that looks like it belongs on a big gaming-centric platform. Dungeon Defenders is an action RPG with a strong leaning towards tower defense. Choose one of the four hero classes and battle enemies by building towers, setting traps, and marching onto the scene yourself, fisticuffs at the ready. You'll find a full battery of loot, upgrades, equipment, and customization for your character, and best of all, online co-op multiplayer is supported, allowing you to fight with your friends anywhere in the world! Big features from a small game, showing you just how serious some development studios are about creating interesting content for Google Play Android Games. Unfortunately, this game also requires a hefty pre-play download (600MB), so make sure you're at home with wi-fi at the ready.

1 to 50 - We've said it more times than we care to admit, but the simplest concepts often turn in to the best of games. Assuming they're well-made, of course. 1 to 50 is another excellent example of this. A speed-based recognition game, all you do in this title is touch numbers in order from one to 50. The 5x5 grid holds most of the numbers you'll need, and after you clear a digit a higher one will appear. If you hesitate, the next number will be shown to you. The only goal is to see how quickly you can touch all fifty numbers. Simple? Oh yeah. Fun? You bet! Perfect for a "riding on the bus and don't wanna stare at the guy with one eyebrow anymore" diversion? Thank heavens yes! And it's free, so that's good, too!

Dungeon Scroll - Remember this game back when it was released for PC as well as iPhone? Now an Android version is available, and it's exactly what you expect. And want! Crawl deep into a dungeon and fight monster after monster, each one pecking at your health and trying to end your game. Instead of smacking them with swords and spells, you battle by spelling words using sets of letters that rotate each round. The bigger the word, the more damage you deal, and special tiles appear to help give you an upper hand. It encourages a curious strategy where you hold back on impressive words until you have a tough enemy to defeat, saving the tiny words for tiny enemies. A great release on the Android platform if you love RPGs or word games!

@ cyberjar88 - why? just why? it's shoved down our throats enough

back on topic.. nothing here that really tickles my fancy, but i have to say these games look great, especially Spectral Souls. it's not something i'd normally play but i might just have to have a look.

some excellent finds here - keep it up :D

Just a note here, that Dungeon Defenders is also available for iOS and will be on pc soon :).

I want to try Spectral Souls SO MUCH. But I'm concerned my phone won't run it smoothly. Also, I'm concerned about the umpteen other games I have bought and never played.

Is Spectral Souls a port of the PSP game? Is it licensed at all, or is it an illegal rip?

@ Dora - I just downloaded Spectral Souls on a first-generation Motorola Droid (I've been WAITING for a good tactics game on Andriod), and aside from a *little* slowdown when the combat effects are in full-swing, it runs great!

As for the game-hoarding, I can't help you, other than to say "you're in good company" :)

@ Mark - The full title is "Spectral Souls--Resurrection of the Ethereal Empires"; I'm not familiar with the franchise though, is this the same as the PSP?

I love that the Android games are getting a fair bit of the spotlight in this feature recently... keep up the good work! I may never have stumbled upon SS without seeing this post...

1to50 is far more fun than you'd expect.

Spectral Souls is a completely licensed Android version of the PSP game. No worries here!

It's a game of pong! And it's playable!