Hey there Android gamers! Miss me? Well fear no more, as I, the Android Game Finding Android have returned with more games for the mobile scene! The Marketplace has enjoyed a healthy surge of content in the last month or so, and I have poked and prodded my robotic nose through those releases to find the best of the best so I can share them with you. Now, since I'm sharing something, will you share that ice cream sandwich with me?

Use a barcode scanning app to scan the QR codes and start downloading the games to your phone. We also recommend AppBrain, a wonderful program that integrates app browsing/installation across web browsers and your phone! 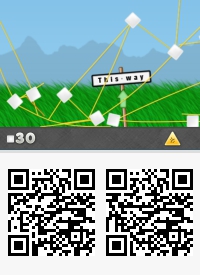 Spaghetti and Marshmallows - While it may not be a culinary fad anytime soon, Spaghetti and Marshmallows makes an excellent free-form physics game! The goal is to build a relatively stable structure out of uncooked spaghetti sticks and bits of marshmallows. Swipe to create the sticks, then tap to stick a fluffy marshmallow on the end, attaching other pieces of spaghetti to the gooey bits. Reach high enough to support marshmallows in the marked circles and you'll get to continue to the next stage. Much more difficult than it sounds, and much more entertaining than it should be allowed to be! The free version of Spaghetti Marshmallows is available by scanning the QR code to the right. 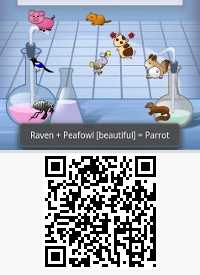 Genetics - A new take on the "mix a bunch of elements together to make new things" genre that's been gradually taking hold since Doodle God appeared on the scene. Instead of putting fire and water together, here you're making new animal species by analyzing "genes" present in individual icons. For example, you can make a scorpion by mixing a rat (which has a tail) and an ant (which is an arthropod). It's a little more abstract than base elements, and the interface could use some work, but once you get the hang of it, you're in for 256 unique species and a whole lot of surprises. 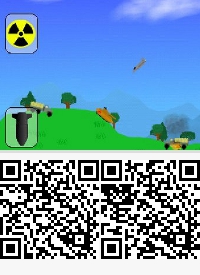 Atomic Bomber - Here's a simple idea: bomb the bad guys driving around below, destroy their buildings, and get a powerful weapon as a prize. Your plane flies around in the sky, wrapping around the sides of the screen and automatically turning down when it reaches the top. Tap the screen to change directions, and tap the bomb icon to fire away. Bombs arc using natural physics, so you have to aim based on where your enemies will be when the bomb hits as well as your direction in the skies. Surprisingly tactical in nature, and the weapon upgrades are a... "blast"... to use. The free version of Atomic Bomber is available via the right side QR code.

Do these work on Blackberry because my QR scanner just brings up code...

@Guest Guest:
No, these are Android games and the codes will take you to the market app in Android.

No, these are Android Marketplace games.

every week i check out the mobile games hoping for at least one android game, and all i see are iphone games (boo)

i understand there's probably more activity for iphones because the apps make more money for the makers there, but is there any way the frequency of android games can increase? even one a fortnight would be an improvement :)

I had no idea about the QR barcode scanning for androids, or at least that it could be used like this. Such a cool feature, that it may be a reason to skip the iPhone altogether. If I can avoid typing in a bunch of search strings on a virtual keyboard with a quick monitor scan, I will do it. Very cool.

delrio_gw: I'm in the same boat, trust me. I love the gaming scene on the Android, but the problem is most of the releases just aren't up to our quality standards to feature on Mobile Monday. I'm always digging into the Marketplace, though, and hope to feature them more frequently as time goes by. It's all up to the developers!

Jazz Clark: I really recommend AppBrain as well. It's unbelievably convenient to browse and install games/apps on my phone from a web browser.

I'd like to add my vote for more Android content here please. And for people who want to see/review Android apps on your computer and send them to your phone, they've opened an official market now https://market.android.com/ so that's nice to have.