Are you one of the estimated 6 million new iPad owners this holiday season? Or was it just new socks and a cheesy sweater this year? We've been keeping up with the gaming scene on Apple's really big touch screen device, and we're pleased to report there are several great reasons to part with some cash in exchange for a great gaming experience.

Corpse Craft - A real-time strategy game/puzzle hybrid with visuals based on the works of Edward Gorey. Corpse Craft casts you in the role of a school child who must create and send various undead critters out to fend off and eventually destroy the fort of an opposing schoolmate. The trick is that crafting units is done with a samegame grid at the bottom of the screen. Clear groups of blocks to add materials to your queue, and spend materials to create monsters with unique abilities. It's... an unusual set-up, to be sure, but the premise works like a charm, and as soon as you start playing, you'll be hooked for a very long time. A Flash version of the game was reviewed by us back in 2008. 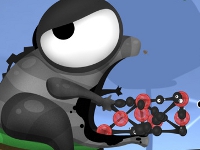 World of Goo - Normally, touching sentient black balls of goo isn't a good idea, but in this case, it's encouraged. You loved the game when it was released for Mac/PC back in 2008, and now World of Goo is back and sporting a fine new touch interface that is perhaps the best way to craft goo towers ever made. The goal is to send a certain number of goo balls through the suction tube at the end of the level. To get there, you'll have to build a wobbly structure from point A to point Not A, using several types of goo balls with their own unique characteristics. Gravity is both friend and foe in this highly creative game, and being unleashed from any sort of interface device (mouse, Wii remote, etc.) has done wonders for the game! 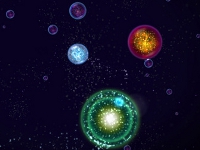 Osmos - Ok, so this zen-like puzzle game is great on the PC, right? Now, take away the mouse and give you the ability to directly interact with your mote. See where we're going with this? Yeah, it's great. Zooming around the amoeba-like world, absorbing other organisms to grow larger and larger, it's all so great when it's right in your hands staring you in the face. Check out our Osmos review to get a feel for the game, then nod your head slowly as you realize how natural of a fit it is for the big-screened touch device. 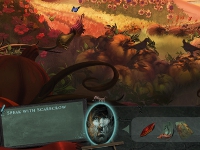 Drawn: The Painted Tower HD - The beautiful hidden object adventure game from 2009 is back and even more accessible on the iPad platform. A full port of the PC/Mac game, Drawn features over 70 areas to explore and solve puzzles in, complete with an original soundtrack, a lush visual package, and gesture navigation. An already great game making a flawless migration to a new platform!

Dunno how they are on iPad, but the computer versions of Osmos and World of Goo are quite fun and worth it. :)