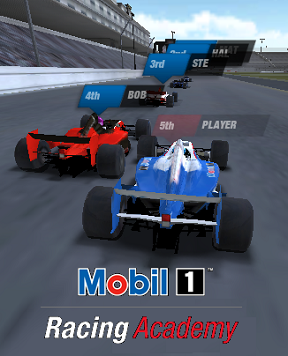 Gentleplayers, start your engines, and get ready for the green flag to wave! It's time to learn to race like a champ, as some of the best in the biz steer you from rookie driver to pro as you face off against a field of challengers, and, perhaps, learn a little about proper engine maintenance. 4T2 Multimedia and Mobil 1 present Mobil 1 Racing Academy, brought to you by Mobil 1: A Mobil 1 Production.

At the start, you select your mentor, either British Formula One Champ Lewis Hamilton or NASCAR driver Tony Stewart. You can switch between the two mentors by clicking the garage door. Each mentor has three courses in his class's progression: Hamilton with Go-Karts, British Formula 3 and Grand Prix, and Stewart with Midget Cars, Open Wheel, and NASCAR. Once in the race, you will accelerate, brake and turn with the [arrow keys]. As you accelerate uninterrupted, over time, your Boost Gauge will light up. When lit, hit [spacebar] to activate it, and get an extra jump of speed. Winning races gives you points to upgrade your cars, unlocks new tracks, and drives you ever higher in the worldwide standings.

Note: While the game is fully playable without it, saving your progress, ranking your race times, and some customization options do require a login.

Okay, so Mobil 1 Racing Academy isn't exactly subtle about its brand loyalty. However, it's created with a loving eye towards the world of automotive racing and the technical specifications therein. Certainly the gameplay is far closer to arcade than simulation, but the physics in each of the available modes feel as they should, from the methodical bounciness of Go-Karting, to the slippery speed of the Midgets, to the high-impact maneuverability of Formula One and Stock Car. Having only two tracks for each variation means that there's more breadth than depth, but the action, while basic in nature, is fast and responsive. The in-game ads are also well implemented, which is to say that they're short, skippable (though provide a small but not unfair upgrade bonus when watched), directly relate to a product that the game's target audience would be interested in, and sweet cool cars going, like, real fast. (I'm a man of simple tastes, people.) Good racing games for the browser are comparatively rare, so when a slick production like Mobil 1 Racing Academy comes along, it's hard not to like it. All that's missing is a frothy glass of milk to chug in the winner's circle.