Anyone who's ever had to wait an hour outside in the cold for a transfer, which is to say, most users of public transportation, would probably leap at the chance to show that they could do a better job making the trains run on time. Well, Mini Metro (hosted here with generous permission), a minimalist strategy simulation game by Dino Polo Club, currently in its alpha release, will show you just how long you can keep up, when there's an entire city ready to crowd your stations and lock your grids. Your city starts simply, with only three stations you'll need to connect. Drag the mouse from one station to another to create a line between them, drag a line's terminator to another station to extend the line, drag a line's terminator over the last station in that line to remove it from the line, and double click a line to remove it entirely. You have a limited number of lines you can place, along with a limited number of river-crossing tunnels, and they cannot cross or visit a station more than once. The trains run along the lines as quickly as they can, and the commuters decide which trains to board and where to make transfers. As time goes by, more stations will pop up to be added to your lines, and more citizens will attempt to ride them. Once you've played past an in-game week, you'll earn upgrades for the metro. For those that affect individual lines, after you select that upgrade, you'll drag the icon from the left pull-out menu to its desired placement. Eventually, a station will get too crowded, the passengers will get too angry, and you will lose. Until that happens though, you've got a ticket to ride. 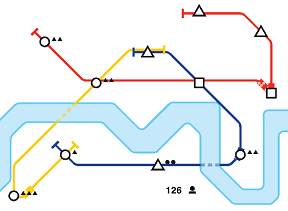 As an alpha version, Mini Metro is only a fraction of what is eventually promised to be. However, as the game popped up in my Facebook newsfeed, with each of my friends attempting to top the other's score, it became clear that people were getting in on the ground floor of something special. It is not merely that Mini Metro has compelling gameplay that hits that casual sweet-spot of being engagingly hectic without becoming too stressful. It's that every time you play, your chart becomes its own bit of abstract efficient beauty... an interactive art generator for your left brain hemisphere to goggle at, like Mondrianism or even The Thinking Machine. And, as implied before, it's great for challenging your friends and/or casual gaming review website readers to beat your score (453! And rising!). So hey, give it a try, then share some feedback to the developers and maybe vote for it on Steam Greenlight. Because, while it may be far from complete, Mini Metro looks like a project right on track to be something amazing.

Thanks to Henry and iceninexp for sending this one in!

Nice! It seemed like it was all visuals at first but it definitley has some depth once you have explored its minimalist interface a bit.
How many points did ye get? I found I would my system would always run out of steam before the 500 mark

I seem to run into trouble when I have a looped track. When I want to add a station to a loop, my terminus always seems to be in the wrong direction.

Yeah the depth in this game emerges at a very elegant pace. It seems basic at first but the subtleties become apparent as you experiment.

There are some interface frustrations as you figure out how to re-configure routes (especially if many endpoints overlap at the same station). Also, I found the individual train upgrade mechanic less than intuitive at first.

This game certainly has great potential if it's this fun and addictive (and stable) in alpha. Be sure to vote for it to be greenlit on Steam if you enjoy it.

Interesting...the game gets easier if you do poorly by shrinking the play size and allowing for more repeats.

The game really discourages designing any sort of main interchange, since every station has the same (small) capacity.

@Bill: There is an upgrade you can get that increases the capacity

Fun, addictive game that has a lot of potential. Also, it reminds me of the cryptic (to me) metro system in Paris that runs through the Seine River.

BTW I lost an upgrade, after trying to re-route the route with the upgrade :-( Agree with the comment about some frustration with the interface esp. for re-routing, but that doesn't prevent me from wanting to play for a better score!

Some points I think need to mention here...
1. You can pause the game by clicking the clock.
2. You can reroute by click and drag the "T" tail.
3. You need to apply the C buff on one route after you get it.
4. Passenger can just take off at any station of their symbol, so you don't need a big network.

The upgrade system needs to be more flexible - perhaps adding some form of currency (you could get more for every passenger safely delivered), and then players could buy upgrades as they please.

I also hope that this game will be available in other formats other than steam when it is released.

Did 669. Have a better strategy than a big circle ? Tried using a central station first time but obviously it overcrowded after some time. Quite addictive game, I want to know the best strategy.

707! Tried to keep the lines evenly sized, except for one slightly longer, upgraded line. Also, tried to distribute the different station symbols evenly between the lines. Only 2 tunnels. Avoid concentrating traffic on particular stations (if can't be avoided, use station upgrade). It's misleading to think about how actual traffic systems work, that logic doesn't work here.

1121 my second try. Highest I got since was 800. It seems very dependent upon resource placement.

That's all I can think of at the moment.

sylventhe: if you check the dev blog below, they're adding support for multiple trains on one line, and the latest build gives you INFINITE tunnels/bridges: the only catch is that they slow you down. It's pretty great.

My question if someone can answer is what is it about the special symbols (+, fan, diamond, and star) that differentiate them from circles and squares? Also trying to figure out if day of the week affects traffic on the lines...does anyone know this? I LOVE this game btw...725 is my high score thus far

scpat, I don't think the symbol operate any differently from each other. They just add complexity since, for every new symbol, that's one more rider that your existing stations can't help. I don't know whether day of the week or time of day changes anything, but that'd be an interesting twist.

Looks like no one has commented yet on the alpha8 version, which has some significant changes. The rail cars only hold 4 passengers (!), tunnels are initially limited to 3 (3 being the number of tunnels allowed, not 1, 2, and 5 is straight out), and upgrades for cars and tracks are now integrated. Tunnels no longer slow down the rail car speed. Not sure why they ever did. It's a bit harder to get a good score, I think. Loops are the key. Finally just broke 500 (627, actually). Most stations were in one big loop with 11 stations and 5 rail cars. Fun to watch while it worked, but traffic at some of the stations increased to ridiculous levels, and I was done. Anyway, as a subway enthusiast, and map collector and designer, this is a fun and addicting game, even if a little tougher than I'd like.

Nice! It seemed like it was all visuals at first but it definitley has some depth once you have explored its minimalist interface a bit.

How to close it in mac (full screen)? I don't know.

this could be a ios app or androd app