There's a lot to be said for the phenomenon that is Minecraft, and I promise you that when it gets to the stage that my local museum advertises it as part of "summer camp" that it is a phenomenon. The sandbox building simulation has come a long way from its noble beginnings, and multiple ongoing updates by dedicated team Mojang means more content is always incoming. So how, then, does Minecraft - Pocket Edition, the mobile version for iOS and Android devices fare? Well, despite not being anywhere near as content-rich as its desktop predecessor, still pretty darn decently. 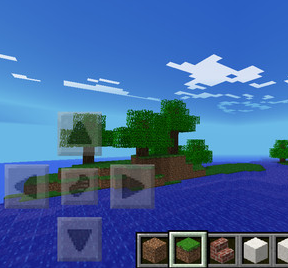 In essence, Pocket Edition is exactly the same sort of game as the desktop version... a first-person romp through a blocky world you can tear apart brick by brick (and almost anything is a "brick") to rebuild and craft whatever you like, from diamond swords to towering scale-model recreations of the USS Enterprise you'll give up on once you realise just how much work is involved in it. (The most commitment I could ever muster was spelling BUTTFACE out in Netherrack in the sky that overlooked the tower my husband has been building, because I love him.) The Pocket Edition controls with an onscreen directional pad on the left to move and jump, and you can swipe your finger on the right side of the screen to look around. Pressing and holding on nearby blocks will cause you to start flailing away at them with your fist until they break away and can be picked up and added to your inventory, where you can use them to craft. The Pocket Edition offers a much easier crafting interface in that you're simply presented a list of items, and if you have the required materials, you can just tap to create them instead of trying to figure out recipes.

Right now, the game has both Creative Mode, where you're given limitless blocks to build whatever you like safely, and Survival Mode, where you have to contend with hunger and monsters, as well as actually having to search and work for all the blocks and materials you need. Of course, Pocket Edition is still technically in Alpha, and thus lacks a lot of the gameplay editions its big brother desktop version has had. You don't have to worry about making eye-contact with an Enderman, for example, because they don't exist, and neither does the game's iconic baddie, the Creeper. These are, however, things that are constantly changing as updates roll out (albeit much more slowly than the desktop version) and in time you can expect the Pocket Edition to grow increasingly more robust. 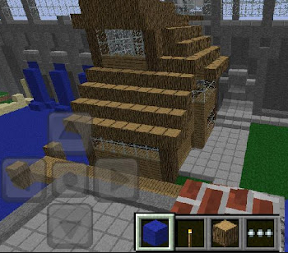 A bigger disappointment than the wait for more content might actually be that the game does not currently support multiplayer of any sort, and when it does in the form of Minecraft Realms, you'll have to pay a monthly fee to use it. If you only want to play by yourself it's not a big deal, but if you enjoyed playing with buddies, and especially if you could host your own server for free off of your computer like I can for the desktop version, this is a little frustrating. Speaking of, getting used to the onscreen d-pad/lookabout combo takes some doing too, so you can expect to do a lot of wildly swinging the camera around or charging in the opposite direction from where you need to be until you get yourself sorted.

Fortunately, both the Android and iOS versions come with free demos to try so you can see if this is something you want to get your feet wet with and wrap your head around the controls. Chances are desktop Minecraft aficionados might find Pocket Edition a bit wanting at the moment, or at least until more updates roll in, and you wouldn't ever call this a substitute for the desktop version either. What this is, is a great way to introduce newcomers to the simple yet addictive sandbox simulation play that has devoured the time of so many for years now, and a satisfying little bit of diggy-diggy-hole to take with you wherever you go. Minecraft - Pocket Edition has a lot of potential as more updates keep rolling in, and as long as you don't mind waiting for more bells and whistles, or if you just want to see what the fuss is all about for the first time, it's still worth picking up.

I've been playing the Pocket Edition as my only version of Minecraft so far, since Alpha 0.6.1, and disagree with two points of the review of the current build: First, while Endermen are indeed not yet in Pocket Edition, Creepers absolutely are, and according to one of the unofficial Minecraft wikis, have been since 0.4.0. Second, I haven't signed up for Realms yet, but I have been able to play multiplayer locally with another player on the same Wi-Fi network, in the same physical room. (For some reason the game doesn't work connected to my home Wi-Fi service.)

It'll probably take quite awhile, but it is encouraging that significant updates are rolling out... I can't wait to read your impressions of the eventual 1.0.0 release.