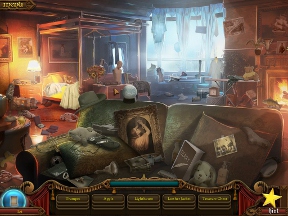 Your grandfather has left you a message saying he's going to be a contestant on The Hidden Object Show. However, that show was canceled years ago, so you know something is awry. Driving off into the dark countryside, you encounter a mad barker with a number of people held hostage inside a glitzy mansion. The only way to free everyone — including your grandfather — is to play the madman's hidden object scenes and beat him at his own game!

The game works just like a gameshow, right down to spinning a colorful wheel before each round. The wheel is stocked with hidden object games of various types, and when it stops, your randomly-selected scene will begin. Some rounds feature more than one scene to complete, but after you've done so, you'll return to the wheel for another spin, eventually freeing a captive with your object-finding fervor.

A fun feature in Millionaire Manor: The Hidden Object Show is when the word "BONUS ROUND" appears during a scene. Click it and you'll be taken to a separate hidden object scene where you have a few seconds to collect pieces of chips scattered around the area. Gather as many as you can, and when the scene ends, completed chips will give you bonuses like hint tokens, unlock tokens, and skip chips that can be used on the wheel-o-games. A wonderful way to spice up the already whimsical gameplay! 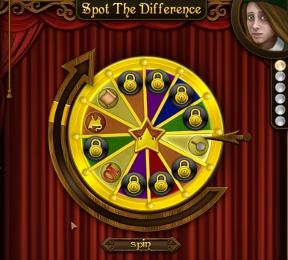 Analysis: It's a big understatement to say Millionaire Manor: The Hidden Object Show is a "breath of fresh air" for the hidden object genre. Many casual gamers love finding objects in titles like this, but with the glut of copycat releases in the past few years, it seems you must also enjoy a "spooky" storyline, a dark and sour setting, and stale scenes that get old after half an hour. This game, however, is more of a parody of the genre, pulling the best bits out and concentrating them together, allowing you to experience the fun of finding hidden items without getting bogged down in details you'd rather just ignore.

Apart from its refusal to fall victim to the usual hidden object game traps, Millionaire Manor's next biggest strength is its variety of games. The usual stock of hidden object scenes are present, such as finding items from a list or picking things out by looking at their silhouette. You'll also discover scenes where you must combine objects to match list items, solve riddles to learn which items are hidden, or even peer through a blurry lens at your scene. Most of them are great fun to play, and if they aren't, your skip chips come in quite handy.

Millionaire Manor: The Hidden Object Show represents everything a hidden object game should be: light-hearted, fun, fast-paced, and full of variety. The challenge level is just about right, and you'll have a great time spinning the wheel-o-games to see which hidden object scene you get to play next!

Hi me i want to know i play this game on my cell and the only thing i can't play it's the combine it doesn't work may'be because the screen it's small but it should work i just don't know what to do, i click on the object and i try to go on the word but no, do there's a way to make it work the combine on a cell?

No body play this game on their cell phone?