It's bigger. It's better. But most importantly... it's back! Firebeast has generously given us a sequel to the hit action brawler game Mighty Knight with Mighty Knight 2! There is no curt note from the king this time, but a mystic woman calling you on another adventurous quest, so at least things have gotten a bit more personal, if even it's much more vague. While you start off alone, just as in the original, you don't have to be the knight right off the bat. Who you are depends on how you answer the mysterious woman's call to action. You gain heroes as you go, letting you have the chance to be (or work alongside) a rogue, ranger, knight, wizard and a few more... as long as you unlock them. There are plenty of levels, a gaggle of special abilities, and a hodgepodge of achievements to keep anyone fully interested for the whole ride. 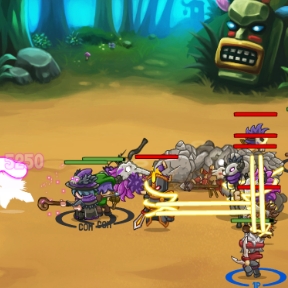 Mighty Knight 2 has a cleaner interface than its ancestor, and less key choices. You can still move around with either [WASD] or the [arrow] keys, but your attack is only with [J] and your specials are [K] and [L], though you won't get them right away. They need to be unlocked with stars you get from passing the campaigns and winning challenges. You also get coinage for each win and the achievements, and with that money you can buy levels for your heroes. This means you can upgrade who you want, when you want, and form your own perfect band of fighters. While the interface is much cleaner, it's still pretty easy to lose your character in the horde of enemies you need to clear off to win. Especially when your hero dies and you're switched to a previously AI-controlled ally. It could have been solved with a large arrow over the head of your character, but not everything can be perfect. There isn't much else to be nitpick-y about in this great addition to the first game. It can be a bit grindy near the end, but with the good payouts in the challenge levels and being able to make a new team and switch your character, things are entertaining right until the very end.

Does this game only save your progress if you are logged onto JiG?

nevermind. I have started 3 games so far, yet Not A Single One Has Been Remembered. I tried to download my file, yet when I try to upload it, It Says That It Cannot Upload Saves From A Different Domain!! I understand that, kinda, but I am going FROM JiG TO JiG. What Gives!!!!!

5,323 Views
1 Comment
jayisgames.com— Most people who have encountered computer games have either a negative or a positive opinion about this pastime. For many years, disputes between opponents and supporters of computer games have not subsided, and they have the most diverse arguments....  ...

8,953 Views
4 Comments
chrpa— Jayisgames needs your help to continue providing quality content. Click for details Mobile users may already know Snapbreak's puzzle games, Doors: Paradox and its predecessors are available for some time on both leading platforms. Pc users now can try the...  ...

6,784 Views
0 Comments
chrpa— Jayisgames needs your help to continue providing quality content. Click for details Welcome to the Roundup 42 with three games! As mentioned in the previous roundups, only odd-numbered episodes are featured since even-numbered are for Robin Vencel's patrons. More...  ...