Why do knights always have to do all the dirty work? Our poor Davion gets a message from the king – no, not even a message, a silly drawing – asking him to eliminate the Dark Order, and off he goes without a word. Sure, he gets three henchmen somewhere along the way as well as shiny new armour and a legendary sword, but what about the health insurance, overtime and holidays? While Davion and his friends contemplate forming a union, they'll still finish their heroic mission in Mighty Knight, a great new brawler by Firebeast. There are fourteen demon-filled stages between our warriors and the powerful Phantogod. You will control Davion, using the [arrow] or [WASD] keys to move, [J]/[Z] to attack and [K]/[X] and [L]/[C] for special skills. You don't have to worry about his friends, since they move (and frequently die) on their own. 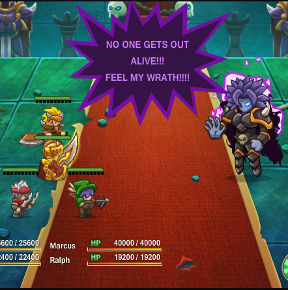 You will start out alone, but will gradually unlock the warrior, the archer and the rogue, each with unique, upgradeable abilities. If that's not enough help, you'll be able to buy runes before every stage to boost various stats. All this costs money, which you get every time you finish a stage, a quest or earn an achievement. That's right, folks, the achievements come with cold, hard cash, but it's not automatically added to your purse, so make sure to claim your reward in the achievements section. The stages consist of the main campaign and one or two optional side quests. Since the main part of the game is relatively short, the quests come in handy and add some replay value. They also provide a way to earn money for upgrades, as they get more and more expensive. Facing the final boss before maxing out the gear and abilities is pretty much impossible, so a bit of grinding is, unfortunately, inevitable. That being said, the side quests are interesting enough (and some include only the henchmen and not the hero) so the grind shouldn't be too unpleasant.

Mighty Knight is a good brawler for people who don't generally like brawlers. It's easy on the eyes (cute, even), it's polished and unencumbered by a ton of commands and complicated moves. That is not to say that it's a beginner's game, no siree. Your henchmen will often die long before you, leaving you alone to fight the throng of enemies, so developing a rune/battle strategy always comes in handy. Every upgrade counts and every rune makes a difference: it's a joy to equip your team with cool new gear and breeze through a stage that gave you a lot of grief just ten minutes before. With all its levels, quests and achievements, Mighty Knight still doesn't feel particularly long, but it does provide a good bit of hacky-slashy entertainment. Plus, we can always hope for a sequel, in which Davion & co. could at least get a decent thank-you note from their ungrateful king.

Pretty fun, but too much grinding at the end. Also, I found the challenge missions are not worth the time and reward, best to just stick to the normal ones.

I've played a bit. It's fun, although the non-controllable characters are basically just meat shields you upgrade for the sake of making money on certain challenges. And..I was disappointed that apparently all of the main characters are male and none of them use magic.

I played all the way to the end. Took a few hours. Sometimes you have to just replay some of the missions to make money. Some of those will just be the companions fighting and you can watch if you want to rest your fingers. I don't know how I beat the last level. The main boss was still alive with lots of energy and it said I won. I tried again to see if it was a glitch and it probably was. I didn't win that time and I played a lot longer. So, there's probably a bug. The game would pause on its own for a second or two quite frequently and more than once there was a stuck bad guy you couldn't fight. Super fun to beat up bad guys for a few hours for free nevertheless!

How do you defeat the boss? I am completely upgraded but can only take him down to 35% health.

3,997 Views
0 Comments
chrpa— Jayisgames needs your help to continue providing quality content. Click for details Welcome to Mobile Monday! Goro Sato's game, similarly as their previous one, is a good classical escape with an attractive looks and a magical atmosphere. The next...  ...