In Mascarpone's indie adventure game Midnight Puppeteer, translated by vgperson, Mayo Michino is just your average sixteen-year-old girl with a foul-mouthed, fanged, talking teddy-bear only she can hear. One night while driving home in the pouring rain with her father, the car stalls, and when her father doesn't return after leaving to find help at a nearby mansion, Mayo decides to go looking for him. What Mayo discovers along with her bear Mister Masper, however, is that the mansion her father disappeared into is no ordinary house, and they'll need to solve piles of puzzles in order to uncover its mysteries. Use the [arrow] keys to move, [Z] or the [spacebar] to select and interact, and [X] or [ESC] to open the menu, from where you can save your game. When you find an item, before you can use it you first need to equip it from the menu, and should you find yourself scrabbling through an air vent or three, tap [spacebar] to move forward. Make sure to save often, and in different slots, since it is actually possible to die in some places. 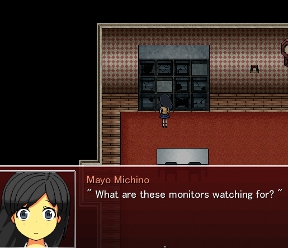 \Midnight Puppeteer is an extremely intuitive little game, knowing just how to drop hints and nudge the player so that you don't feel lost, but without holding your hand every step of the way. The game gradually gets more elaborate as you go along, scaling up the difficulty and even throwing in some sneaky tricks to boot. There's some unexpected misdirection, so if the obvious thing doesn't seem to be working, you may need to take a closer look at your surroundings and your inventory. Despite some backtracking and a few gimmicky chase-scenes, Midnight Puppeteer manages to be both creative and clever. While some puzzles are a matter of knowing where to go and what to use something on, but never fall into cumbersome "adventure game logic", making it easy to stay immersed in the story.

Midnight Puppeteer may have some creepy moments, but it's definitely not a horror game so much as it is a mystery, with a heavy dose of both whimsy and weirdness. Things get strange in a big way, which is saying something when you're talking about a game prominently featuring a thug-like teddy-bear with a scary set of chompers as your best buddy, and the plot unfolds through journals, notes, and newspaper clippings for the most part in addition to what you glean from simply examining your surroundings. The latter half of the game breaks the flow somewhat by packing in a lot of lengthy cutscenes to explain more of the narrative, but honestly, it gets so crazy it sort of needs it. Despite its relatively simple design, Midnight Puppeteer still makes an impression with its expressive characters and bizarre situations, and has a great soundtrack to boot. Midnight Puppeteer will probably only run you a few hours, but if you love puzzles and stories with twists and turns to burn, it's more than worth settling down to enjoy.

This is a good one! I love how well-put-together everything is and how little things like

(Is that big enough to be spoiled? better safe than sorry though :'D) do change the graphics and dialogue in various places - the creator clearly put a looooot of thought and effort into this game, and I think it paid off!

I can't figure out the clock code.

Any hint would be appreciated. Unless the clocks in the game are based on real time, which they could be considering what my clock at home is reading right now, in which case, I'm even more confused!

You're looking at the speed at which the clocks in the room with four clocks (and ONLY the room with four clocks) move. There are four in a row, and you can see that they all tick at different speeds if you watch their pendulum. Take account of the times each one displays, and order those times from slowest to fastest. You're looking for the room on the third floor to the upper right.

I got to the bonus room, and after perusing the info the only thing I missed that I really would have liked to see was why the sight of the pink panda made the old man drop dead!

I didn't have early enough saved games left to allow me to go back and see it without starting the game over from the beginning.

Masper's theory is that the original panda the old man saw wasn't a solid pink, because the most recognizable thing about a panda is its pattern. If it had been solid pink, it would have just looked like a pink bear. So it would have had to be pink and white, like how the painting looks with the plate on it, or pink and black, or even light pink and dark pink.

Meanwhile, the panda his son brought was solid pink - see the picture of him applying the paint with the bucket.

So the old man knew right away that his son was trying to cheat him, and was so shocked about it that he died.

So this might sound dumb but how do I open the file after winzip has it? Which file do I pick?

NVM I figured it out.

I'm not hearing any sound... is there sound, or is my computer acting up?

There is definitely sound. :)

Rats! Means I have to find the problem... thanks though.

Hello, I'm having trouble in the forest maze, when we are playing as Sohta >-

How do I open the safe on the first floor? I feel like I am missing something very obvious....

And I just figured it out ha, yay for seeing the obvious before I was told!

I figured out the forest maze, and finished the game. Quite a clever game, with the hugest plot twist possible at the end!

I can't figure out the maze by the piano to save my life, help anyone?

I'm having trouble with a certain part.

After you turn on the boiler you have to go into the leftmost room where the girl chases you. I can't get past it because the weird invisible guy( I forgot his name)is a the top of the room and also starts chasing me.

Is that supposed to happen, or am I glitched?

Have a problem in what I think is the end.

people stuck in an area with the huge insects, got the tools and opened the vent but nothing happens

I think I may have gotten myself stuck in the vase part.
I might have watered the wrong vase but I can't seem to get any of the vases to empty ._.
Do I have to start over?

> Dora— In this compelling and creative indie RPG, you play stubborn, silent Alice, a human girl living in Shadeling Town in the Land of Time. When the great clock's hands shatter one day and brings the Land of Life to a frozen halt, Alice must brave its dangers, and her past, to set things right.  ...

> Dora— Orphaned and amnesiac, young Allen finds himself at a strange school watched over by an eccentric Teacher, where the other children are just as odd. In this surreal adventure game by Miwashiba, translated by vgperson, horror meets psychological fairy-tale for a compelling experience that's a little rough around the edges.  ...

> Dora— A trip to an art gallery takes an unsettling turn for nine year old Ib. When the lights go out, she suddenly finds herself alone, and something is begging her to journey deeper into the belly of the building. A free horror adventure game that delivers some fantastically freaky scenes and a ton of scares, both subtle and otherwise, for a memorable experience that's far more effective at times than its big budget peers.  ...

> Dora— The days drag by, each one the same as the one before, but in this chilling horror game by Ryuuchi Tachibana, translated by Vgperson, not everything is as it seems. Stuck in a rut in your dreary apartment, you barely notice the changes at first, but soon they'll be impossible to ignore. With almost 40 different endings and a unique approach to gameplay and storytelling, it may require some trial-and-error, but it's definitely worth a look.  ...