Translated by vgperson, Miwabisha's Alice mare blends subtle horror with surreal adventuring to tell the story of Allen, a young orphan with no memories who lives in a building with an eccentric "teacher" and a group of strange children. An impromptu decision to investigate a noise from upstairs his first night in sets in motion a bizarre journey into a twisted set of wonderland dreamworlds both he and the other children seem to have no hope of escaping. Use the [arrow] keys to move, [spacebar] to select choice and interact, and hit [ESC] to open the menu where you can save your game whenever you like. The game has seven possible endings, but in some cases, it's possible to bring your adventure to an early end by making some lethal choices, so save frequently and in different spots... and maybe pay attention to the warnings the game tries to give you! Please note that after going through the door behind the closet in the room where you meet a certain hooded character for the first time, though the screen will stay black, the game is not bugged... simply try walking forward to make the lights come on! 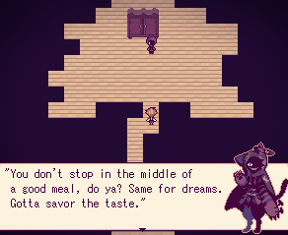 There's a lot to like about Alice mare's, with its twisted and imaginative take on fairytales and detailed character design. Though the heavily symbolic environments and dialogue might at times make it hard to interpret what's happening, the different worlds and tales attributed to each child are compelling enough to make you want to see it through. Revealed in notebook scraps and abstract drawings, their stories are both unsettling and sad. While some of the puzzles are more clever than others, however, none of them really feel like they have anything to do with the story or game at all and wind up serving as nothing more than busywork. Alice mare's biggest issue is that it doesn't give a lot of direction, and some of the requirements for advancement are vague at best, making it easy to miss a lot of things... especially the nine special items you have to find to unlock a certain ending. Other issues are more related to simple user-friendliness, like the way the highlight for selected choices almost perfectly matches the text window's background, making it difficult to keep track of what choice you're selecting.

As a result, Alice mare is a game that's still intriguing and imaginative enough to play, but one that could have done with a little more polish to streamline its gameplay. Like "Teacher" himself, Alice mare is a little eccentric, and will need a patient player with an appreciation for metaphor and weirdness to truly enjoy it.

Is there a glitch in this game? Right when I entered to go to this other world, the screen just stayed black, can open my inventory/save/load but that's it...Seems like a good game up until that point.

Nice, except I can't seem to finish a puzzle and advance in the game because I don't have a numpad on my laptop. :(

I got the good night end. Not sure what the other endings are. It's a nice game, I never felt stuck, it's simple for people like me who aren't that great with logic puzzles. I liked the progress of the story, but it's still pretty sad over all. Poor teacher.

Think I'll play it again for another ending.

Hi Brandi, I mentioned this specifically in the review. Try walking forward.

Hi Sakutou, sorry to hear that. You can't use the row of numbers above the letter keys on the keyboard? I didn't use the number pad for this.

Take a screen shot, and then as it goes, the patches in the top 3 correspond to 123 and the bottom row is 456, just find out where the differences are, then answer in ascending order, no commas, spaces etc. There were 3 differences.

Aww.. I figured out the Teacher's name. Hint: It's a word puzzle from the diary, the number of questions give a clue to the number of letters in his name.

Got the 'Recepient of Love' End. So touching. It's still pretty sad though. Is there an even better ending? :/

@Zkizmany: I am having the same issue, no words are showing whatsoever. I don't know if my old computer is not compatible with the software or I don't have the right font installed or what, but nothing doing for me either. Which makes me sad since this game looks really cool.

Does anyone know the sentences that are too blurred to read? those ones with missing letters in them.

got the same problem as others: Because there's not font added in the game folder, I only see white fields instead of words: So, could anyone who is able to play tell me and the other ones, what fond is needed?
Thank you

if im not mistaken, the font is MS Gothic.

When I try to download it it says the page isn't found/doesn't exist. I'm trying to download for windows, by the way. Can anyone help me?

Please try downloading it again. The file was updated so the old link to download became invalid. If this happens in the future, you can just click on the images in a review to go directly to the game's page. :)

@Livy Aurora Calista: thank you, I've figured it out with trial-and-error (I still don't know what the third difference is).
Also, I'm sure I suck at this game, but what is the solution for the medicine mixing riddle? Is there a special move I have to make in order to make it work?

@metalhamster i'll stuck at the "back" riddle forever if it wasn't for my friend XD the medicine riddle? traffic light.

can someone help me with the riddle the dictator give us? i'm stuck at question 2 :/

wolf....sheep.....and cabbage i stuck at there ~do someone know the answers?

When you're in the dream with Chelsy (the second dream) and you reach the other side of the river,

does picking the flowers (which make it bloody and turns on a scream sound effect) change your ending outcome or change anything at all?

Hey,i'm having trouble on typing the password on Letty's riddle. I tried using the row of numbers above the letters on my keyboard but nothing types. I also tried the numpad but it still wont work. Is there anything i've forgot to get or i really cant type on it? Please help >.

@brandi michelle
go up a little, then either left or right.

@Zkizmany
try to download and install 'MS Gothic' font.
or change 'graphic display' mode to 'software' in the option

can't finish the final world
The door near Cheshire Ending's strange hole is locked and I can't go back, it's locked too
Two ending left
I try to got all ending and can't go through these Q^Q

what can I do?

This will pretty much solve any problems you're having.

Does anyone know what the Shards of XXXX are for? They're still in my folder, what's their point?

My first ending was Recipient of Love. It was cute, but rather sad. Are there any endings where no one dies?

hey i cant figure out how to get the Shards of XXXX to get the last ending i need. :s help?

Someone could tell me what the answer is on the number of cats would get in a year? I'm stuck on that part XD

I can't get the first shard of XXXX!! I tried, but the character keeps going to the next area! And yes, I have changed my keyboard sensitivity. It doesn't help. Suggestions?

I can't get the first shard of XXXX because Allen keeps going to the next area instead of staying put. I changed my keyboard sensitivity, and it didn't do anything. Is my game messed up?

I figured out the last riddle (The teacher's name)
but his diary didn't show up like the other endings where you can write their names on it...
please help, how can you get the diary to show up?

The number of cats you can get in a year is 1, because there is only 1 cat, so it can't mate and can't get pregnant

To get the diary, you have to get all the "Shard of XXXX", which are nine, two in each dream boys (Stella, Joshua, Chelsy and Letty) and one on the shelf before unlocking the door to meet with the teacher, but if you do not get some of the "Shard of XXXX" from the beginning of the game, others "Shard of XXXX" does not appear.

I have the same problem as Pit Tangka - I'm stuck in the "negative" room after Teacher leaves, with two locked doors and nothing to interact with. Tips?

Got it! @Pit Tangka,

try to interact with the back of the shelves, the diary is hidden from your point of view.

Heey in the first part when i must introduce de numbers the game crash, anyone know what is?

H-Help. In the end, there was a hole next to a door. I went down it. Then it was dark, so I walked forward. While I was walking, I pressed save. I saw Cheshire cat, and he talked to me. In the end, I said "Ok". But i wondered what would happen if I said "no?" So then I came back to the dark passage where I saved, and started to walk forward. But I've been walking for over 5 min. Why can't I get to Cheshire cat? All I wanted to do was just to see what would happen if I said "no" instead of "ok".

Just FYI, version 1.07 has come out since this review (which I think covered pre-1.05), which includes some bonus plot-related content. You can get it on the same English-version download page still. The extra content added in 1.05 is briefly discussed on VGPerson's blog, including a link to a save right before that part, at http://vgperson.tumblr.com/post/68637405366/alice-mare-1-05.

how come there's no walkthrough for me here?

Unfortunately, none of our writers were interested in making one. (We don't assign articles.)

For the first riddle of Letty's sign, the numbers
1 2 3
4 5 6
represent the patches of the identical paths
1, top left, the clothesline's clothes change
3, top right, the pair of mushrooms are contrasting colours
6, bottom right, the rightest white rock, or whatever it is, is vertically flipped

There's a walkthrough on the English-download site. Just scroll down a bit.

@Brandi Michele you go up and the cat appears.

There actually is a Mac version available now. Rpgosx has ported a number of RPGMaker games to Mac, and is still porting more.

What are the Coolest Video Game Weapons?

361 Views
0 Comments
jayisgames.com— Long gone are the days of video games being considered children's toys. Nowadays, the video game industry has grown into a multi-billion-dollar industry, with hundreds of millions of people from all around the world playing video games. Although the real...  ...

4,235 Views
0 Comments
chrpa— Jayisgames needs your help to continue providing quality content. Click for details The new episodes in Roundup 59 are really short this week, so here are a few retro episodes to to have something to play. Welcome to the...  ...