Once upon a time it was a dark and stormy night, and there was this guy pondering away in his study. He had just broken up with his girlfriend or something and was getting all lamenty when this bird flies in and starts taunting him. The guy goes crazy, because the bird is quothing the same thing over and over again. So the moral of the story is to not answer the knock at your chamber door or else a pigeon will drive you insane. 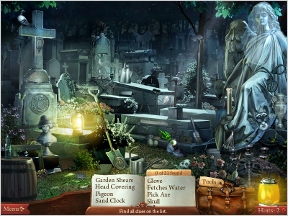 That's how the story goes, right? Maybe. Well, the point is, you are now prepared for Midnight Mysteries: The Edgar Allan Poe Conspiracy, the latest hidden object game from Mumbo Jumbo, creator of the Samantha Swift series. Even if you've never heard of Poe (meaning you spent your life living at the bottom of the sea), all you need to know for the game is he wrote scary stuff and he's dead. Now his ghost can't rest until his death is avenged, so you have 24 hours to solve the mystery or his soul will be dragged down to the underworld. Sure, the real Edgar Allen Poe died under suspicious circumstances, but we won't get all speculative and take the game for more than a piece of fiction, will we?

With the help of a supernatural pocket watch you can travel into Poe's stories and explore them for objects that have been, well, hidden. Some of these items will go into your tool bag to be used later, whether you need wood planks to light a fire, or a sponge to clean a dusty window. You'll also need to solve some puzzles, play mini-games, and talk with the fictional characters scattered about.

Analysis: Midnight Mysteries: The Edgar Allan Poe Conspiracy offers up a solid and enjoyable ghost story based on actual history. Some knowledge of Poe's works makes the game especially fun. Find ravens in the scene and your hint counter goes up. Click around randomly and the ravens are scared away by an angry one-eyed black cat. The storyline becomes clearer if you know why there's a skeleton behind that brick wall or the reason that Captain Kidd makes an appearance. However, if you're unfamiliar with Poe, it won't hinder your enjoyment of the game one bit. 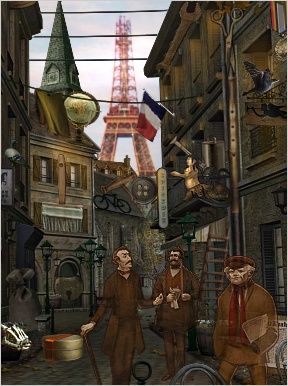 Want a great-looking hidden object game? Midnight Mysteries: The Edgar Allan Poe Conspiracy is one of the best candidates out there. Ripples on the water with fish swimming below? Check. Wind rustling the trees? Check. The pseudo-realistic style of visuals sits between a hand-drawn comic and a meticulously detailed still life, and you won't mind drinking in all of the visual nuances throughout the game.

Midnight Mysteries stumbles a bit with clue descriptions and click detection, the plague of most hidden object games. When you're tasked to find a bottle and there are several candidates in the scene, you need a bit of luck to find the right one on the first try. Some of the mini-games could also use clearer instructions.

Midnight Mysteries: The Edgar Allan Poe Conspiracy stamps its way into the hidden object scene and holds its ground with well-integrated story and gameplay, great artwork, and logical hiding places for items. It's perfect for casual audiences who aren't looking for a lot of challenge but want a good gaming experience nonetheless.

Cemetery - In front of the gate

Cemetery - The graves/Grave of E.A. Poe

As always Kayleigh as put together a wonderful walkthrough for us \o/!!

Cemetery - In front of the gate

Cemetery - The graves/Grave of E.A. Poe

As always Kayleigh as put together a wonderful walkthrough for us \o/!!

I just bought & played this today. Pretty good game, good story and a decent length too.

Hi
I'm in Poe's room now. Chapter 6.
I found all the items. The list of items to find is closed now and the bag of tools too. I can click on anything I want, even on the bird for a hint. But nothing happens. It seems the game is stuck. Can anyone tell me what to do now?
I hope so because I realy like this game and I would realy like to finish it.

@Sanny - chapter 6
Hm, I guess, you already tried closing the game and reopen it? From Poe's room you are supposed to come to a "search the difference scene" and this goes automatically.
So if it does not do, I'm afraid you are really stucked.

The only two options I know:
- Contact the support of the page you purchased the game. You never know, maybe they do know something to do.
- Starting over with a new profile and hope the best.....

I'm stuck at the big rock, the tools left are: cotton reel, shovel, peg leg wheel, beetle, paper, the blue cog is showing to right of the flame caused by the cannon but none of the tools fit. The cog is not showing over where the leg and wheel go, I can't move forward. Cheers, Sue

You may need to visit the beach again in order to finish the big rock puzzle.

Hi Kate
thank you so much for your quick response but um how do I get back to the beach, feeling very dunb here lol, Cheers Sue

No problem, Sue! I believe that you can click on the watch and choose another location to explore.

sueziem-changing locations
Kate is right, that normaly you can change locations with the pocket watch.
But the place you are, it is not possible.

You are in Chapter 5 and all the places you need to be now, you will be brought to automatically.

To see what you might have missed, please have a look at the walkthrough on top of the comments. Choose Chapter 5 and the spoilers for 5 o'clock.

I am having trouble with the eyeholes in chapter 5. I only have one lantern and i am stuck. do not know how to light up the other eyehole.

Im having the same trouble as Stacey the 2nd lamp is missing, have looked at thescreen shot the lamp is definately not there,heeeeeeeelp Cheers Sue

Sue - missing lantern
There are always four ways, trying to solve problems like this:

1. Close the game, start it again - sometimes it just needs a little kick ;)
2. Start with a new profile and hope the best, that what ever is wrong with the game, is solved by this.
But I would only recommend this at the early beginning of the game. Otherwise it can be a horrible waste of time, learning, that the problem still exists.
3. Contact the support of the page, where you purchase the game.
4. Deinstall the game, download and install it again. In most of the cases, you will go on, where you stopped. Hopefully without the problem.

where the eyeholes in chapter 5 they only gave one lantern. where is the other lantern at and where can i find it. please help me . thank you

I'm on the big rock scene and I cannot pick up the pegleg. Is there something I'm missing?? I've already fired the cannon. although under the page it still says fire the cannon but i don't see anymore cannonballs.

Just finished this game...wow, this was, I have to say, the perfect game for me!!
I thoroughly enjoyed this.
It kept my interest, the puzzles were good enough to allow me to solve them without being too easy, and the hidden object & 'further investigation parts' were spot on.
Loved it!! I look forward to the next Midnight Mysteries game.

I need help!
I am unable to "light the cannon" in Midnight Mysteries. I followed Kayleigh's instructions,
but the matchstick will not light the fuse. I
am so frustrated! Please tell me what I am doing wrong.
Thanks Oodles

bbyzgrl - cannon/fuse
I looked it up again and can't find any, that might be missing.
Make sure, that you have done everything before in other locations. Or maybe it is the exact point (to be honest, I do not remember, if I did had problems there, but sometimes kind like this is just a question of one pixel).

Hope it works out!
Greetings, Kayleigh

i'm having trouble on follow the map to find the keys i just don't seem to get it?

JIGGuest
Can you be a bit more specific please, I don't understand the problem right now, sorry :(

i dont know what to do w/ the map!Please help,im stuck! Cant follow the map!

I started playing this game because I was bored and it kind of reminded of the I Spy books... But I got stuck on the map part in chapter one becasue no matter where I click it says its wrong... Starting at the blue square, is the number in the circle on the map = the # of squares in the direction the the arrow points?

I was also pretty pschyed because the one walkthrough I looked at was put together by someone with the (almost) same name:)

If anyone can help me out with the map part, thanks a bunch,
Kaileigh

Anyone know what is written on the document that Captain Kidd has you sign? I clicked on it too quickly and didn't get to see.