Once again, an unquiet ghost needs help! Who they gonna call? Why, you, of course! Especially since this is a rather famous ghost, the legendary magician Harry Houdini. It's time for another hauntingly good mystery to solve in Mumbo Jumbo's Midnight Mysteries: Haunted Houdini, a fantastic adventure/hidden object hybrid where you, ghost detective that you are, must figure out why poor Harry and his wife Bess have not been able to meet in the afterlife. You know, there's some weird irony going on here, playing a game talking to the ghost of Harry Houdini who was a notorious skeptic on the subject and who became famous for debunking mediums, spiritualists, and others who claimed to talk to ghosts. 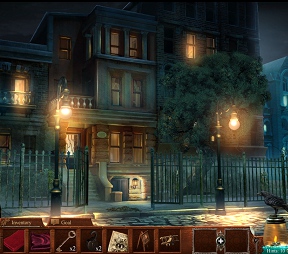 Our story begins with the ghost of poor Bess, still looking for her husband after all these years. Why is his spirit still trapped? Is it punishment for his disbelief? Or is there a darker story to be found, one in which Houdini did not die a natural death, caused by his enemies from the world of spiritualism? The journey takes you from the Houdini house in Harlem on an incredible journey through time as you visit England, France during the battle of the Somme, and a theater in Detroit where Harry performed his last magic act. Along the way you will speak to many spirits, some friends, some enemies of the controversial magician as you uncover the clues that will solve the mystery and eventually unite poor Ehrich (that was his real name, you know) with his beloved Bess.

Midnight Mysteries: Haunted Houdini, like the others in the Midnight Mysteries series, plays like a standard point-and-click adventure with a changing cursor guiding you through the various items that can be examined or picked up and places to explore. The bottom-loading inventory of items that you acquire along the way has a lovely "plus" feature where you can place two previously unrelated items together, combining them to make something useful (like putting together a paintbrush with charcoal to create a primitive fingerprinting kit). The game is composed of equal parts problem solving (involving exploration and use of those found objects), classic hidden object scenes (where you can acquire even more items for your inventory), mini-games, and puzzles. 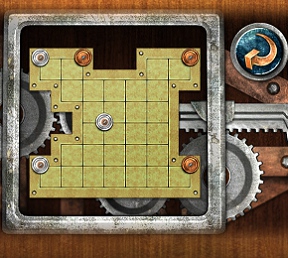 Also included in the game are three modes of play (casual, advanced, and expert) along with variable types of hints depending upon the mode of play. Light sparks or curtains of light along with useful descriptions accompany the casual mode. The usual hint feature is both a refilling hint timer and an instant hint giver based on the player finding ravens hidden in every scene. The hint timer also has a third feature, showing a silhouette of an item without costing a hint. There's a notebook that keeps track of the story and clues and even a built-in strategy guide to help you along your way. Alongside the regular gameplay are some side quests, trophies that can be won for certain actions and an "unlimited" hidden object mode that can be unlocked by finding a certain number of four leaf clovers which are hidden everywhere in the game.

Analysis: Mumbo Jumbo has brought the goods again with the fourth in the Midnight Mystery series, creating an interesting mystery surrounding one of the most fascinating and mysterious characters from the last century. As expected the visuals are stunning, the story is intriguing, and the atmosphere creepy as befits the title. Unusually, however, the title character himself is not around much (his spirit is trapped, after all), so you will learn quite a bit about the life and times of Harry Houdini from the folks who surrounded him, both friend and foe. 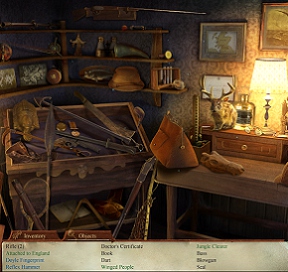 It's nice to see that the quality of the series has not suffered in this fourth installment. The hidden object scenes are a nice mix of list items, items found from clues, and items that require interaction. The puzzles range from easy to difficult and are a nice balance that doesn't overwhelm the basic story. Best of all are the "magic tricks", places in the game where you simply participate in some fun card tricks that don't require anything from you but amazement at how it is done. And although it is pretty well documented how Houdini died (peritonitis caused by a ruptured appendix), the game does an amazing job at raising doubts and including the possibility that he was actually murdered as has been recently proposed.

Midnight Mysteries: Haunted Houdini is being marketed as a "Deluxe" edition, rather than a "Collector's" edition, which means you get a complete story and a very useful built-in strategy guide for the price of a regular game, rather than something double the price stuffed with extras that you might not necessarily want. Even without any "extra" chapters you should find a goodly amount of gameplay within, along with the fun of the "unlimited" hidden objects modes or going back to play in different modes or to earn the various trophies. That's a lot of bang for the buck, and quite worth it.

What's not to love? The three modes of play make the game attractive to a wide variety of hybrid enthusiasts, the story is intriguing, the gameplay amusing, the visuals stunning, and the overall experience is one that freaks out and delights in equal measure. Midnight Mysteries: Haunted Houdini proudly carries the series banner forward and provides great entertainment at a reasonable price. Give it a try and prepare to be both entertained and enlightened.

Street Outside of House

Sidewalk in front of Gate

Train Compartment One and Two

Street Outside of House

Sidewalk in front of Gate

Train Compartment One and Two