Warning: This game contains flashing and strobe-like elements that may be hazardous to players with certain sensitivities.

This game is available in Pay What You Want format, including free, but please consider paying the developer if you enjoy what you play!

Mibibli's Quest is a great free indie retro platformer that keeps all the great points of the old days. Well, mainly the one where the games are just ridiculously tough and you spent more time retrieving the controller you threw across the room than you did alive in the game. But there was always something about that that kept us locked in and it will be no different in this high difficulty action game. Your goal is to reach the end of each levels (using the [arrow] keys to move), shooting with [Z] all the bad guys you can and jumping with [X] over those you can't. Except in the level where you're a spaceship. Or the level where you have to dance DDR style to avoid death. Or the one where... well you'll just have to see. Ryan Melmoth's Mibibli's Quest has some of the most unique enemies and gameplay I've seen in a long time. The game gives you different difficulty options to try out, but even on easy you're going to be weeping into your smashed keyboard. Still, you'll find yourself going back again and again for its creative levels and its satirical humor. 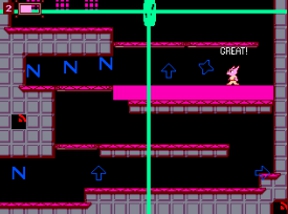 Now I'll admit, some of the deaths you're going to succumb to are because of the semi-rough game controls, Mibibli moves a bit faster than you expect and it can lead to accidentally running off of platforms or inching a bit too far into spikes. But after getting to know this pink Mew-two look-alike, you'll soon just use this excuse to blame all the deaths on it, instead of the high amount of platforming skill this game takes. The nice thing about Mibibli's Quest is that there is more than one world open at a time. When you get too stuck on a level, you can go try your hand on another one. The not-so-nice thing is you only ever have three lives, and these can be lost when your small health bar is drained, or when you back up against some pointy spikes, or fall off the screen. When all three lives are lost, check point or not, you have to restart the level all over again. While you can restore health from the odd drop of a enemy, you can only gain back lives when you reach the second checkpoint in a stage and drink a potion, but use it then, or it's gone.

In the beginning, you're given a little insight to the controls, and when you unlock new bullet types it explains them somewhat, but other than that you're really on your own. Levels are not always as liner as most platformers are. Usually your goal is to get to the other side of the screen, but some of them you'll have to try bottomless pits out if you can't see any other way. When you're stuck not knowing where to go it just means you aren't looking at all your options. Not all bad guys are defeated as easily as you expect, and you'll have to die a few times to figure them out. But this is all part of the Mibibli's experience, the other part being trying to handle all the oddities. The main boss breaks the fourth wall repeatedly as well as some of the NPCs. There is no explanation. They just... are. But if you enjoy the surreality of it all its going to be a game you don't forget for a long time. 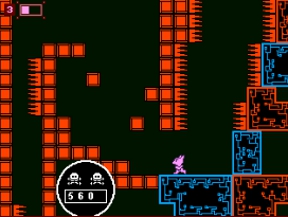 Speaking of long, this game is much longer than you'd ever expect a free indie game to be. Though at times it feels like the final of Lord of the Rings, where you watch ending after ending, part of you is going to be glad it is still going. None of the worlds repeat themselves and they all have their new trick to mess with you. It really tests your gaming skills in all areas. It also mocks a lot of your gaming needs, like a beatable boss (with the first fight, just keep going, and trust me). Some things go on a little too long and make you a bit uncomfortable such as the cut scenes or the long empty pathways. Getting hurt knocks Mibibli backwards and sometimes to his/her doom and no where does it tell you that jumping underwater makes you jump higher. None of that however is going to keep you away. This game just has too much going for it than that. The twisted worlds, the secret bosses, and the tongue in cheek humor is going to make you go back again and again. You'll breath easy as you pass some of the most difficult levels, but in the end you're going to want to restart all of it over once more.

I played this back when it was first released and absolutely loved it.

In a nutshell, it's Megaman 2/3 with bizarre aesthetics and a couple of levels that briefly yet wildly change the mechanics of the game. It's as hard as an early megaman game, maybe moreso due to the lack of energy tanks, but does at least offer easier difficulties that grant you more life or enable enemies to drop health refills. The easier difficulties will lock you out of two bonus levels at the end of the game, but they're remixes of earlier content and not new levels with new gimmicks so you shouldn't feel left out if you go easy.

It does a great job of making the unique mechanics be part of the challenging levels instead of just dressing. The DDR level (which is very early in the game) offers the player a tempting choice since you can opt to evade the dance arrow attacks entirely, or intentionally hit them but evade damage by making the correct moves. The bosses are equally weird and varied, and will challenge a skilled player.

It also offers some great hidden content. Some levels have hidden shortcuts you can use to skip some of the jumping challenges, and others feature entirely optional bonus sublevels. There are also hidden items that can be collected for a strange and funny reward.

It kept me excited throughout the game wondering what I'd discover next. As stated in the review, the game is much longer than it appears even when you're moderately far through it. I very highly recommend this one to anyone who can muster the courage to play a platformer of Megaman level difficulty.